Creative producers Tawbox worked with the grime artist to create the set for his performance last Friday on the pyramid stage of Glastonbury 2019.

Speaking to Dezeen, Tawbox creatives Chris "Bronski" Jablonski and Amber Rimell explained that they worked with set designer Misty Buckley to create a stage that would make Stormzy "feel at home".

"We wanted to take south London to the farm," said Rimell. "The creative vision and direction for the entire performance was to honour his culture from his roots, to music, to youth and also church."

The stage required multiple levels to accommodate the huge cast, which included dancers from Ballet Black, hip-hop performers and a 44-strong gospel choir.

The multi-levelled design was also a nod to the high-rise apartment blocks and Brutalist architecture that Croydon – a large town in south London, and the area where Stormzy grew up – is known for.

Sliding video doors and lighting effects were used to transform the stage from an "arty" pared-down backdrop to a prison-style interior, complete with projections of barbed wire fences.

While previous shows saw the directors opt for a more straightforward stage design, Bronski explained how he and Rimell wanted to make this show "more theatrical".

They wanted the set to convey a sense of stature, complimenting the artist's height and his strong presence.

"Before this, we have generally stuck to a more linear and simple stage set, then let the nature of the show do the theatre," explained the director.

"This Glastonbury performance was always going to be a celebration of where he is from geographically, musically and culturally, so a more involved set was perfect to deliver this vision and also nail down this concept," Bronski added.

The team created a multifaceted set made up of various "moments" that would reflect the different sides of Stormzy's own character and music.

During the show he performed upbeat tracks including Shut Up and Vossi Bop as well as more soulful songs like Blinded by Your Grace, Pt. 2.

"We had to show a hard-hitting Stormzy, a gentle Stormzy and everything in-between," said Bronski.

The rapper opened his set wearing a Banksy-designed stab-proof vest to perform the charged track Know Me From.

Running along the top of the multi-levelled structure, these were used to display various statements in bold print throughout the set – an element typical to Glastonbury shows that Buckley felt would help connect the audience to the show.

The creators were selective in the statements they chose to display, which included names of south London towns with a connection to Stormzy, quotes by Labour MP David Lammy and the story behind the Ballet Black dance solo.

By doing this they hoped to make them all the more "memorable and powerful".

Sliding video doors were used so that dancers and the live band could be seen when performing, but were hidden at other times.

The team made these doors from transparent LED screens, so that when the doors were shut, the performers could be projected from behind as silhouettes.

"We used the set design to portray an array of various moments," explained Rimell. "For the track First Things First, we were able to mask dancers behind the concrete pillars, unseen by camera and audience."

"They then revealed themselves during the song where they were up-lit to support Stormzy in conveying his lyrics at that point during the song," she added.

Five colour-changing "lighting pods" designed by Routledge were also used to light up particular parts of the stage. Four circular LED lights made up each pod, which created an element of movement as they illuminated or blacked-out certain people on stage.

Bronski, Rimell and Buckley used these elements to create one of the "more arty looks" of the show.

As Stormzy performed his track, Crown, the transparent screens were closed and the pods acted as a "crown of light" over the artist and the four groups of backing vocalists. 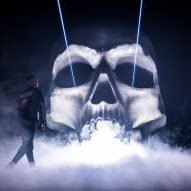 London-based Tawbox studio, who have worked with a number of famous artists from Cardi B and Rita Ora to Jess Glynne and Post Malone, were also behind the set design for UK rapper Dave's Psychodrama tour.

Heavily influenced by the way audiences light up the stage and record gigs with their phones, the set design saw two hydraulic-powered trap doors built into the floor to lift Dave and his special guests onto the stage without being seen.