A huge "urban living room" forms the heart of the looping MÉCA cultural hub, which BIG and FREAKS have completed beside the River Garonne in Bordeaux, France.

Named MÉCA, an acronym for Maison de l’Économie Créative et de la Culture en Aquitaine, the 18,000-square-metre centre contains a media library, performance space and art gallery in a bid to establish the city as "the epicentre for culture".

It was designed by BIG and FREAKS to be an extrusion of the city's promenade, blurring the boundary between the building and public space, that people can walk through and engage with it.

"OARA, ALCA and FRAC have already arrived when the building completed – and now that MÉCA has opened, the fourth and final element is here: the city and the citizens of Bordeaux," said Bjarke Ingels, BIG's founding partner and creative director.

"Within this new urban room, we have already seen the arrival of the first skateboarders, the first romantic couple sharing a bottle of Bordeaux on the steps, and the first demonstration on the sloping promenade," Ingels continued.

"So consider MÉCA's urban room as a blank canvas, or rather an empty frame, for the Bordelais to fill it with their ideas, their creativity, their culture, and to make it their own."

BIG and FREAKS first revealed the design for MÉCA in 2012, as part of the Bordeaux riverfront's revival. It is positioned on the site of a former slaughterhouse between a series of other industrial buildings, which are also being turned into cultural institutions.

Now open to the public, MÉCA forms a home for the visual arts organisation FRAC, alongside the performing arts centre OARA and the literature and movie organisation the ALCA.

Each organisation occupies a third of the building, with OARA and ALCA in the two vertical columns and FRAC in the asymmetric arch, which stretches over the public square.

The entire complex is wrapped in thousands of prefabricated concrete panels, which are sandblasted to create a texture that echoes the local sandstone-buildings throughout Bordeaux.

Directly connected to the city's promenade via a series of giant steps, the public square is designed by BIG and FREAKS Architecture to be an "urban living room", while doubling as a stage for city events. 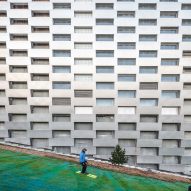 Open to public 24 hours a day, it is hoped that the general public will engage with MÉCA rather than the select few that are interested in the arts.

On the ground floor there is a lobby that is punctured by a "spiral pit" seating area and a restaurant.

The restaurant is visually connected to the "urban living room" via a giant window, and is furnished with bespoke red furniture and cork chairs designed by BIG in a nod to the city's reputation for wine.

Flanking the restaurant is OARA's black 250-seat theatre, which is fitted with flexible seating configurations, and an 80-seat cinema belonging to ALCA. These are also punctured by randomly-placed windows to "create transparency" and offer passersby glimpses inside.

FRAC occupies the upper floors of MÉCA, host to with seven-metre-high exhibition spaces lit by skylights, production studios for artists, storage facilities, a cafe and a 90-seat auditorium.

The cultural centre is complete with a seven metre high MÉCA sign that hangs over the public square like "a modern chandelier".

There is also a permanent bronze sculpture of Hermes by French artist Benoît Maire that is intended to encourage visitors to "reflect on the contemporary culture of the region".

BIG is an architecture practice with studios in Copenhagen, New York, London and Barcelona, which was founded by Danish architect Bjarke Ingels in 2005.

Other recent projects by the studio include a vortex-shaped education centre in the Faroe Islands' capital, a university building in Massachusetts with copper walls and a proposal for a pagoda-like hotel in Copenhagen's Tivoli amusement park.