A top Apple pundit has sparked rumours that the tech company will stop manufacturing its unreliable butterfly keyboard for its upcoming MacBook laptop.

Ming-chi Kuo, a financial analyst with sources in Apple's supply chain in Asia, has reported that Apple will ditch the keyboard due to high production costs.

The company first adopted the keyboard for its MacBook laptop computers in 2015. The thinner profile of the keys allowed Apple to shave a few millimetres off the thickness of its laptops.

However the butterfly design – so-called because the mechanism beneath it resembles a winged insect – proved so liable to break it prompted a class-action lawsuit from frustrated customers.

Kuo has suggested that Apple will bring in a new keyboard made from glass fibre that uses more traditional scissor-switch keyboard technology.

In a scissor-switch keyboard, keys are attached with two pieces of plastic that interlock like scissors.

"There have been successful developments in the new scissor keyboard," Mac Rumors reported Kuo saying.

"The new keyboard could improve the typing experience by offering longer key travel and durability by adopting glass fibre to reinforce the keys' structure." 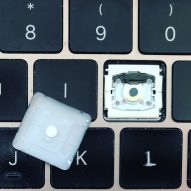 Scissor-switch mechanisms beneath each key offer less room for dust and debris to get stuck underneath keys.

"Though the butterfly keyboard is still thinner than the new scissor keyboard, we think most users can't tell the difference," continued Kuo.

"Furthermore, the new scissor keyboard could offer a better user experience and benefit Apple's profits; therefore, we predict that the butterfly keyboard may finally disappear in the long term."

Kuo predicted that the new keyboard will debut with the 2019 MacBook Air, but won't roll out for the MacBook Pro until 2020.

Apple brought in its butterfly keyboards four years ago to make its laptops slimmer and the keys quieter. But customers reported that keys were liable to break if even a small amount of dust got underneath.

Plaintiffs in the lawsuit accused Apple of rolling out the design in its products despite knowing about this issue.

Apple apologised for issues this year

Apple issued an apology in March 2019, after a Wall Street Journal columnist complained her keyboard had broken after only four months of use.

"We are aware that a small number of users are having issues with their third-generation butterfly keyboard and for that we are sorry," said an Apple spokesperson.

"The vast majority of Mac notebook customers are having a positive experience with the new keyboard."

Main image is by Ryan Morse.