Plaster, concrete and shiny steel merge to form the greyscale interiors of this menswear store in Zhengzhou, China, which has been designed by Atelier Tao+C.

Set inside what Atelier Tao+C describe as a "banal" shopping centre, the JHW store has been designed to be an "austere, monochrome" space.

To achieve an all-grey aesthetic, the studio has covered surfaces throughout the two-storey boutique in Shanghai plaster – a finely-ground mixture of granite stone and cement.

Shanghai plaster was typically applied to the facade of art deco-style buildings in Shanghai during the 1920s.

"Reusing this once-popular yet forgotten material, we seek to evoke memories of the most dynamic and creative era and city to convey a more 'local' sense of the street," explained the studio.

The studio is also hoping that the use of a material distinctive to China will subtly reflect the ethics of the brand, which aims to promote domestic fashion brands and emerging local designers.

Perforated sheets of steel have then been erected in a continuous line around the store's periphery, forming a "lightweight inner shell". As sunshine seeps through from the windows directly behind, the floor is dappled with spots of light. 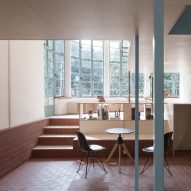 Steel has also been used to craft blocky display plinths and thin rails from which clothing items are hung.

Decor has been restricted to simple strip lights, which are suspended horizontally and vertically in a grid-like arrangement.

A part of the existing ceiling has been cut away to form a double-height void in the store. It's interrupted by a couple of concrete structural beams and a transparent walkway that diagonally crosses the second floor.

A glass box that the brand can use as a display or installation space appears downstairs, where it appears to burst through the store's front elevation.

The floor directly in front of the service counter has also been recessed to form a small, stage-like area where talks can be held.

This is one of the few projects that Atelier Tao+C has completed outside of Shanghai, where its office is based. The studio has previously overhauled one of the city's traditional lane houses, inserting a lightwell at its centre to brighten the interiors.

It has also renovated a Shanghai apartment to feature floor-to-ceiling bookshelves, turning the space into one huge library.