Wooden boards extend out from different levels to create a spiky exterior. Each of the tips of the thousands of boards is coloured blue to match the hue of the sky.

Inside, the walls are covered in a printed screen to create a cyclorama of a jungle. The pavilion is then completed by a waterfall, wooden stools and bright pink hammocks that were made in the south of Mexico.

"Pedro & Juana's world-within-a-world, Hórama Rama, is a manifold of views in which to see and be seen, to find and lose oneself in a radically different environment," said MoMA's Sean Anderson, associate curator in MoMA’s Department of Architecture and Design. 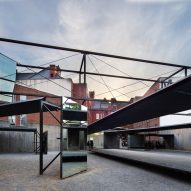 The design is the winner of this year's Young Architects Program (YAP), an annual competition held by the Museum of Modern Art (MoMA) and MoMA PS1. Each year, the museum selects a design from an emerging studio to overhaul the museum's courtyard.

Pedro & Juana was selected ahead of four other finalists including Ghana-based Design Office, Matter Design from Boston, Oana Stănescu and Akane Moriyama, and fellow Mexican studio TO. An exhibition featuring their proposals, as well as previous Young Architects Program winners, is open alongside Hórama Rama.

"For the 20th anniversary of the Young Architects Program, each of the five finalists designed potential – of surface, of movement, of space, of structure – as narratives that both reveal and conceal," said Anderson.

Hórama Rama forms the latest in a series of diverse installations that have been built in the courtyard over the years.

Previous designs have included pivoting mirrors and an elevated runway, a web of brightly hued rope and a cluster of circular towers built from bricks grown from corn stalks and mushrooms.

Hórama Rama will be open to the public from 6 July to 2 September,  MoMA PS1, 22-25 Jackson Ave, Long Island City.

Photography is by Kris Graves courtesy of MoMA PS1 unless stated otherwise.