Australian architect Matt Gibson has created a multi-generational home from a stack of zinc-clad boxes on a narrow infill site in Melbourne.

According to the architect multi-generational living, which is becoming increasingly prevalent in Australia, lent itself to the thin site on Wellington Street.

The irregularly stacked boxes that form the house allow it to be segmented vertically to cater to different generations of the family.

With a residential street to the north and a busy freeway to the south, Gibson sought to maximise a connection with sunlight and the outdoors while minimising any acoustic disruption or overlooking.

The stepped arrangement of boxes on the southern facade responds to the neighbour's views and lighting requirements.

Due to the zoning regulations of the site, Gibson was required to create a building that would be used for business purposes on at least one level.

So the house on Wellington Street has a commercial space at ground level with four floors of residential arranged above. 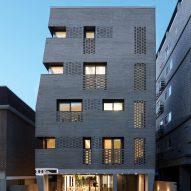 A strip of existing redbrick wall alongside the building has been retained, creating a slim alleyway leading to a stair up to the first floor residential areas.

The first to third storeys have three clearly defined zones. The communal spaces such as the living and dining room, the private bedroom spaces, and finally the "retreat" spaces are all arranged inside different boxes.

Roof terraces on the second and third floor provide outdoor places to relax with views over the city.

An atrium at the centre of the plan brings light into all of the living spaces, and gives a visual connection between the house's levels.

It doubles as a cooling stack for ventilation, and mechanical shades have been installed above this atrium so protect it when the sun is at its highest during summer

Matt Gibson founded his practice in 2003. Previous projects include a house extension in Melbourne featuring a woven steel-mesh curtain, and a concrete and stone home in Melbourne's suburbs inspired by Brazilian Modernism.

Photography is courtesy of Matt Gibson.