A cantilevered viewing platform is one of 10 architectural elements made from weathering steel that Snøhetta has created for the Perspektivenweg walking trail in the Austrian Alps.

Snøhetta designed the series of architectural interventions for a walking trail in the Nordkette mountain range above the town of Innsbruck, Austria.

Named Perspektivenweg, which translates as Path of Perspectives, the 1.7-mile panoramic trail begins 1,905 meters above sea level at the Seegrube station on the Nordkette cable car.

The viewing platform has been designed to take advantage of the mountain views from the trail.

Snøhetta designed the simple structure so that it appears to "grow out of the terrain".

Made from Corten steel – a type of weathering steel – with a metal grate floor, the cantilevered platform gives visitors views across the Inn Valley below.

The viewpoint is one of 10 minor architectural interventions along the path that have been designed to enhance the surrounding mountain scenery. 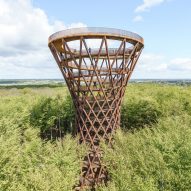 "Using small design gestures, we highlight striking elements of the Alpine landscape, adding to the experience of the dramatic mountain scenery rather than creating one eye-catching structure," explained Patrick Lüth, managing director of Snøhetta's Innsbruck office.

The other structures include a set of stairs that follow the slope of the mountain and are designed to be used as a small auditorium and a lookout structure.

There are also a group of simple Corten platforms topped with wooden planks that have been built on the gentle elevation of a hill known as Big Stone and several benches.

Each of the structures has been created by adapting the methods used to build avalanche barriers in the Nordkette mountain range, which are also made from Corten.

A quote from Austrian philosopher Ludwig Wittgenstein has been engraved into each of the Corten structures.

"The words invite visitors to take a moment and reflect, both inwardly and out over the landscape, giving a dual meaning to the path of perspectives," said the studio.

The cable car that leads to the Perspektivenweg walking trail departs from the town of Hungerburg, where a funicular station designed by Zaha Hadid is located. Hadid designed four stations on the Hungerburg Funicular, which runs into the town of Innsbruck.

Architects around the world are creating cantilevered viewpoints as tourist attractions and to give visitors interesting perspectives on particular locations.

Arc Designs created a cantilevered viewing platform in a former military base in Gibraltar, while Cooke Fawcett projected a rooftop observatory from the roof of a car park in London.

Photography is by Christian Flatscher.