Design collective Disarming Design from Palestine has set up a design school in the West Bank offering courses for Palestinian designers, and residencies for international students to learn about craft from the region.

The recently established Disarming Design School is based in the historic Hosh Jalsa building in Birzeit in the West Bank – an area of land to the west of the River Jordan, which is one of the disputed territories currently under Israeli occupation that make up Palestine.

"There are no contemporary design schools in Palestine. Our academy will be the first of its kind," said executive director of the project, Raed Hamouri.

It plans to offer "vibrant" and "flexible" peer-to-peer education, residency programmes and Create Shops for local makers "which maintain an active relationship with the local design and crafts communities", according to production and design manager Ghadeer Dajani.

These will be complimented by professional workshops, design talks and screenings of design-related films. The space will also house a library of books relating to design and the creative industries, as well as a creative lab.

Its founders do not intend for Disarming Design School to be a traditional design academy, rather for it to be alternative space for the study of design and craft.

There are some design courses at universities in the Palestinian territories but the team has found that these are based on a more practical, traditional approach to the design profession.

They have noticed a lack of a strong design discourse and culture.

"You should rethink the idea of the academy and avoid the traditional idea of the modern, white building and the fancy design culture," explained Annelys De Vet, a Brussels-based Dutch designer who works as the label's artistic director and is part of the team establishing the school.

"We are developing another model that can be inclusive, community-based and focused on resilience, emancipation and self-empowerment through acts of design."

It is being set up by the team behind Disarming Design From Palestine, a label creating and selling useful goods made in Palestine, co-run by Hamouri and Dajani.

"We already have international-based residents coming in and giving specialised classes and workshops," said Hamouri. "We want to support our Palestinian communities with a design academy that connects our designers and artisans with professionals who have a broad experience."

"Disarming Design from Palestine is actually planning to plant the seed of the first Palestinian Academy of Design, targeting all of the designers and artisans all over the Palestinian territories," Hamouri added.

In the longer term, the group hope to establish a critical design program concentrating on the impact of design in a conflicted and politicised reality.

The particular context of the region requires a program structure that is "responsive to local needs and both possibilities, and impossibilities".

"Designing in a conflict zone asks for a critical and sensitive language," said De Vet.

"The Palestinian designers have very limited travel opportunities and hardly any access to international platforms and markets. Additionally, resources and tools are constrained."

"Through design, one can reclaim agency in another way than for example through journalism, politics or the arts," she added.

This summer, Disarming Design, in collaboration with the Palestine Museum, will run two weeks of workshops for 15 Palestinian and 15 international students, and Palestinian artisans and collectives.

Sessions will be run by seven tutors from five institutions, including Willem de Kooning Academie, Rotterdam, Sint Lucas School of Arts in Antwerp, and Lucerne School of Art and Design. 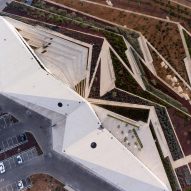 Alongside these will be members of the Disarming Design team, as well as curators from the Palestinian Museum in Birzeit, whose current exhibition Intimate Terrain: Representations of a Disappearing Landscape will provide the starting point for the summer school.

The museum was designed by Dublin-based practice Heneghan Peng following an international competition. Located on a hilltop overlooking the Mediterranean Sea, it features a faceted stone exterior and sits in terraced landscape gardens.

In the next few years, Disarming Design will establish a temporary masters programme at the Sandberg Instituut in Amsterdam about design in conflict areas. Of the group of 17 students, approximately a third will be Palestinian.

The intention is that a group of Palestinian students will take this masters programme before returning to become instructors at the design school in Birzeit, or engage in its foundation in some way.

The school's programme will focus on "bringing communities together from Palestine and beyond, to create, resist, and share their stories through design".

Telling stories about the region through collaboration locally and internationally is something that Disarming Design works to achieve through the products it creates with local artisans.

Products include an olive wood spinning top depicting a watchtower and separation wall, a bowl made from lacquered papier-mache of discarded Palestinian newspapers, called Old News From Palestine and a measuring cup – Measuring Inequality – that demonstrates the unequal division of water in the region.

"The label aims to spread alternative narratives about contemporary Palestine and reflect upon the function of creative practices in situations of conflict," said De Vet.

The founding of the school and the plan for a future academy is the next step for the design label that was set up seven years ago by De Vet to bring together students and innovators in the Palestinian design world.