A former horse stables on the grounds of Tuscan art retreat Villa Lena has been renovated by architecture studio Hesselbrand to accommodate a series of rustic guest suites.

Villa Lena is situated in the heart of Tuscany on a sprawling, 500-hectare wooded estate dotted with vineyards and olive groves.

During the 19th and early 20th-century it was the home of an aristocratic Italian family, but in 2013 it re-opened as a hotel and non-profit art foundation that offers an artist-in-residence scheme.

The hotel's guest suites and amenities – which include a farm-to-table restaurant and film-screening room – are housed across the site's disused stables, outbuildings and hunting lodges.

One of the old stables, named Fattoria, has recently been transformed by London and Oslo-based studio Hesselbrand to host an extra 13 guest rooms that reflect "the playful meeting of the traditional and contemporary".

"Fattoria has served so many varied uses throughout the years, so we are excited to use our design to finally open up the site, create new spaces and allow everyone to experience this rich and characterful building," explained Magnus Casselbrant and Jesper Henriksson of Hesselbrand, two of the three co-founders of the studio.

"A carefully curated palette of organic materials and forms have been combined in a way which enhances and amplifies this unique juxtaposition between old and new in both the guest rooms and surrounding social spaces."

The stable's entrance has been expanded to form a grandiose hallway, which still features the original vaulted ceiling and cobbled stone floors.

A double staircase leads up to the white-painted bedroom suites, where surfaces are panelled with grooved timber.

In the bathrooms, pale grey and rich brown Carrara marble tiles have been arranged in a square pattern across the walls, floor and shower cubicle. The traditional material palette here is offset with stainless steel tap faucets and vanity units. 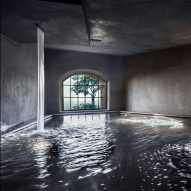 Some of the standalone bathtubs have been placed underneath shuttered windows so that guests can overlook the surrounding verdant landscape.

Decor in the rooms is kept simple with antique ottomans and a selection of ceramic ornaments. Touches of warmth are provided by ochre-yellow curtains, pink scatter cushions or large woven rugs.

The intervention also saw Hesselbrand form a small art library within the building, which displays a rotation of works by residents past and present, and convert an adjacent farmhouse into a honeymoon hideaway for couples.

An outdoor yoga studio and open-air pavilion where guests can engage in "quiet contemplation" has additionally been created by the studio.

This year the Monteverdi Hotel also opened in Tuscany, which occupies a handful of crumbling buildings in the hamlet of Val d'Orcia.

As well as a series of rooms decked out with handmade furnishings by local artisans, it boasts a Roman-inspired underground pool that looks through to a nearby valley.

Photography is by Henrik Lundell.