Brooklyn Kura is the brainchild of Brian Polen and Brandon Doughan, and marks New York's first bar and brewery for sake –  the traditional Japanese alcoholic beverage made from fermented rice.

Polen and  Doughan enlisted local studios Carpenter + Mason for the interior design and LMNOP Creative for the branding design of their outpost in Brooklyn's Sunset Park neighbourhood. Both studios had previously worked together on another Japanese eatery in the city.

Carpenter + Mason designed Brooklyn Kura to make the most of its industrial concrete structure, which is nestled among many still-function factory facilities in Industry City. This industrial aesthetic informs the interior design and is fused with Japanese details.

"In designing a sake bar within the industrial context of Industry City, our approach was influenced by the overlap between Japanese and industrial design elements – which share more of a vocabulary than you might initially think," Carpenter + Mason co-founder Sara Carpenter told Dezeen.

The functionality of a Japanese brewery, and features a facility located in its rear and a public drinking hall in its front portion, led much the layout. The project is modelled similarly with a rectangular, open-plan taproom at its front, and measures 2,500 square feet (232 square metres).

The bar's front facade is made with small cubes of rippled glass topped with a glazed section. This facade filters is used to filter natural light into the otherwise dark space and create a soft warm glow inside. 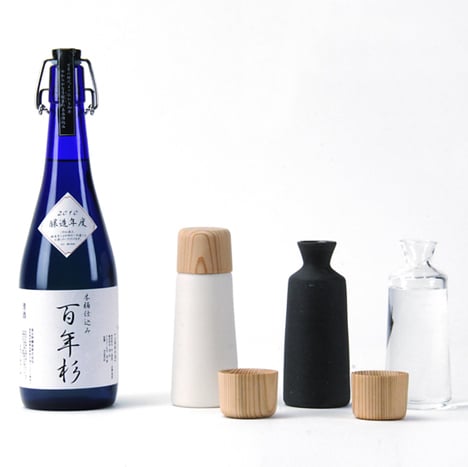 "The aluminium frame and glass block storefront, which blends the notions of a grid system – used traditionally to organize space in Japanese architecture – with the industrial use of glass blocks," Carpenter said.

The bar is designed to form a cosy spot for enjoying a glass of sake with a modern, clean aesthetic.

Communal concrete tables, wood benches and steel chairs are offset by round, cloth-like lanterns overhead for softness. Additional seating is built across the front glazing as a bar.

At the rear of the bar is a wall clad in unfinished cedar, which is a traditional wall cladding in sake production rooms. Here, dozens of different types of sake are on tap, produced in-house with Brooklyn water, American-grown rice, koji and yeast.

Another feature wall references the branding of Brooklyn Kura's bottles, which is informed by clean and rounded lines. This style is reinterpreted with a geometric painting in peach, sage, cobalt and emerald green.

Brooklyn Kura is joined by a host of other eateries, offices and studios in Brooklyn's Industry City – a shipping, warehousing and manufacturing complex built in the 1890s.

Many local design studios have also located their production facilities there, including Lindsey Adelman, Egg Collection and Rich Brilliant Willing.

Other brewery designs include a greyscale outpost in New Hampshire by Richard Lindvall, a sake bar in Japan by yHA and a Copenhagen alehouse with wood and copper accents by To Øl.

Photography is by Char-co unless stated otherwise.