Crumbling buildings have been transformed into the boutique Monteverdi Hotel in Tuscany, which includes rustic bedroom suites and a cavernous spa.

Monteverdi Hotel is the brainchild of American italophile Michael Cioffi, who has spent years reviving the hamlet in Val d'Orcia – a UNESCO World Heritage Site in central Italy.

Old structures throughout the village, including three holiday villas, were refurbished over a 14 year period to form the 29-room hotel, a restaurant, culinary academy, and spa. The hamlet's 14th-century Chiesa Sant' Andrea church and its piazza were also transformed into performing arts and lecture venue.

The project was designed by Rome-based artist and interior designer Ilaria Miani, who is a celebrated for her expertise in restoring abandoned farmhouses, palaces, and villages around Italy.

Together, Ciofi and Miani developed a design philosophy that would "strictly avoid a folkloristic approach to restoration, which has turned many historic Italian villages into tourist clichés". Instead, they aimed to simultaneously promote the storied beauty of the Val d'Orcia and contemporary design influences from Milan and Rome.

"Italians are terrified of having an overly touristic country," Miani told Dezeen. "We really tried to blur the lines between the old village and new additions to the property." 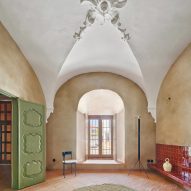 Some of the buildings were modernised in the 1950s and 60s with balconies, expanded windows and brick fortifications to the exterior. Miani however chose to revert them back to the original facades and retrofit stone blocks where needed.

"In the past, windows were intentionally small since rooms had to be insulated, and we preserved that character," Miani said.

"The balconies didn't add any charm and were deteriorating anyway," she continued. "We removed them and designed the rooms so you have direct views out the windows from your bed."

Despite the obvious contrast of contemporary interiors, Miani grounded each room to the Tuscan terroir with rustic detailing and rescued materials.

Salvaged wood appears throughout the property, from the beamed ceilings to the timber-accented archways, and old farm doors were repurposed as closet doors.

Even in the reception, which Miani considers to be the most modern space, wooden chairs hang from iron pegs, and is intended as a reference to the Shaker tradition of mounting furniture on walls.

Guest rooms were individually designed and painted in colour palettes ranging from bold blues, reds, and greens to neutrals and earth tones. Nearly all the furniture is bespoke and handmade by artisans and craftsman of the region. One-of-a-kind wood and metal bed frames, like the Giotto-inspired canopy bed in the La Pieve suite, were inspired by Italian renaissance painters.

For the bathrooms, Ciofi requested that showers and bathtubs face windows to mimic the liberating experience of being naked in nature.

The spa was also expanded with an underground Roman-inspired heated pool, a sensory shower, hammam, and a cold plunge pool. Two travertine soaking tubs sit on an outdoor terrace that overlooks the valley.

Other Italian hotels that are ideal to escape to include a minimalist retreat with views of the Dolomite mountains and a 15th-century holiday apartment with original fresco walls.