Spanish studio Beta Ø Architects has inserted a void and a permeable metal sculpture at the centre of this Madrid family home to let air and natural light flow through its interiors.

Located in the city's affluent El Viso neighbourhood, X House has been overhauled by locally based studio Beta Ø Architects to incorporate elements of the outdoors on every floor.

"It was wonderful because during the project we had intuitions of what could be contemplated through each window or terrace – but we were surprised with the interior-exterior dialogue that we were finding," studio founder, Borja Peña, told Dezeen.

"We only had to allow the light and the atmosphere to penetrate inside the house, in order to blur the boundaries."

The majority of the home's internal partition walls have been knocked through to make room for a huge black metal sculpture that extends up through a central void.

It is composed of staggered rectangular frames arranged in a stair-like formation. 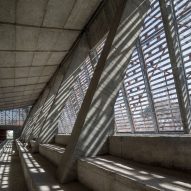 The void is topped by two skylights that allow cooling air to travel through the house during the warm summer months and sunlight to reach spherical hanging planters that have been dotted throughout.

"It colonises the central space in the home like a tree and resolves the house's vertical communication, acting as a true backbone to the setting," explained the studio.

The ground floor features clean white walls and concrete floors – an industrial material purposefully selected by the studio for its ability to be used in both indoor and outdoor spaces.

It's been sparsely dressed with a dining table, a couple of armchairs and a contemporary black wood-burner to avoid creating "drab circulation areas".

A series of much warmer living spaces have been created on the first floor, which is meant to be the hub of the home. Floor-to-ceiling timber cabinetry appears in the kitchen and study, while a timber tub has been created for the bathroom.

Expansive wood-trimmed windows that look through to a tree-lined street have been punctuated in the outer structural walls, flooding the interiors with natural light.

Beta Ø Architects is based in Madrid and is lead by Borja Peña, Ernesto Sierra and Xabier Ortega.

The studio's X House has been longlisted for Dezeen Awards Urban House category and will compete against projects like Form Zero's Planter Box House, which has a greenery-lined facade, and Daniel Zamarbide's Dodge House, which features glass-walled living spaces.

Photography is by Imagen Subliminal and David Zarzoso.