Embracing the circular economy and closed-loop design is the only way for brands to achieve business success while safeguarding the planet, according to Dharan Kirupanantham, a senior member of the innovation team at Adidas.

The circular economy "is the solution," said Dharan Kirupanantham, who is an eco-innovation programme leader at the sportswear brand. "We don't see it any other way."

"This is not just good for the planet; this is good for business," Kirupanantham told Dezeen.

Kirupanantham is a member of the Future Team at Adidas, which identifies trends and investigates new materials and technologies for its products.

He spoke to Dezeen after presenting Adidas' new Futurecraft Loop sneaker at a conference about the circular economy held in London last month.

The fully recyclable sneaker is Adidas' first foray into the concept of closed-loop design, whereby materials used in products are infinitely reusable.

Developing closed-loop products is seen as a key step towards turning the global economy into a circular one, in which waste and pollution are eliminated while natural systems are restored.

The prototype shoe is made of a single recyclable material, thermoplastic polyurethane (TPU), meaning that at the end of its life the plastic can be ground up into pellets and reused.

The closed-loop approach could in theory mean that brands no longer sell products to customers, but instead lend them materials that are returned later for recycling.

"We look at closed loop as the most pure form of the circular economy," said Kirupanantham. "So you make something, someone uses it and brings it back somehow. And that is turned into a new product: a new shoe or whatever."

Adidas is testing the Futurecraft Loop shoe with 200 selected users.

Kirupanantham added: "We're trying a lot of things with take-back and the social aspect of that. How will people bring back their products? What will engage them? What will inspire them?"

Kirupanantham showcased the shoe at the annual summit organised by the Ellen MacArthur Foundation, a charity started by former round-the-world sailor Ellen MacArthur that champions the circular economy. 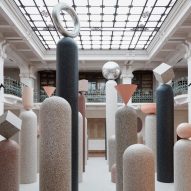 He spoke on a panel that discussed how designers could get involved in the circular economy.

The foundation has so far mostly worked with large brands and corporations, but it recently announced that it wanted designers to help it transform the existing linear economy – in which resources are expended during the manufacturing process and materials are discarded at the end of the product cycle – into a circular one, where everything is recovered and fed back into the system.

In an exclusive interview with Dezeen, MacArthur said designers are "absolutely vital" to the circular economy.

"I would encourage designers to think about how the creative process can build something much broader than their product, and how their product can fit in that much broader restorative system," MacArthur said.

Kirupanantham, a British engineering graduate and philosophy doctor based at Adidas's headquarters in Herzogenaurach, Germany, said he supported the foundation's mission.

"It just makes sense," he said. "It's common sense to the industry, and us. That's how we envisage the future."

"What we're trying to do, in our team specifically, is change how we make products such as shoes and shirts, and what we make it them from, because the ones we have right now, just won't allow us to reach that efficient future of the circular economy. That's what we're trying to change."

"Plastic is a design failure" says Parley for the Oceans founder

Kirupanantham agreed that concepts like closed-loop design and circular design could seem confusing to both designers and consumers, adding that more real-world examples are needed to help people understand the concepts.

"Even in our own company, I think for a long time, [the circular economy] was this conceptual thing," he said.

"We were drawing circles for years and years, but when we had a product and we showed that to our leadership, that was the tipping point in our own company. [We were able to] give them something and say: this is not just good for the planet, this is good for business."

Kirupanantham said that his team at Adidas had a three-stage approach to embracing circular design.

"So the first chapter was an open loop, an imperfect circle, where we took ocean plastic and we turned it into a shoe, but there was still this open-ended part of what happens after that," he said.

"Then when we talk about product-to-product, which is a closed loop," he said, referring to initiatives such as the Futurecraft Loop concept.

"And then beyond that, we start thinking about how our [products] interact with the nature around us," he added, explaining the third stage. "So degradability is one thing that we haven't fully understood yet, or the inclusion of bio-based materials and alternatives."

Kirupanantham said that besides making business sense, the move towards circular design is partly being driven by its younger customers.

"We have to go where our consumers want to go," he said. "Our consumers are more aware, much more streetwise. Regardless of what happens in legislation, it's an economy that we believe they are striving towards. And that means we will strive towards it."