Daniel Libeskind is the latest architect to design a Maggie's cancer care centre, releasing visuals of building covered in angled timber louvres that is set to be built in London.

The Maggie's Centre will be located by the Royal Free Hospital in Hampstead, north London.

Prefabricated wooden louvres will form the facade, angled to provide sun shading and create the centre's curving shape, which is designed to be a welcoming place.

"It will be designed to contrast with its more clinical hospital surroundings, drawing in newcomers with an approachable and undulating timber form," said Studio Libeskind.

"Timber has been chosen as a renewable material to emphasise the building's human character."

From the inside, the louvres will frame views through windows. There will be 97 windows in total, ensuring the 26 rooms are filled with natural light.

Maggie's Centres are charity-run spaces around the United Kingdom and Hong Kong that offer expert support for those affected by cancer, whether they are suffering from the disease or are affected by the illness of a loved one or family member.

The Hampstead Maggie's will have a small footprint, but to maximise the space the building will be bigger on the upper stories.

On the roof, which is level with the surrounding trees, a rooftop garden will be built. 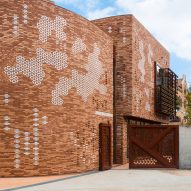 Planted gardens with seating will be placed at both entries, along with walkways connecting the centre to the hospital.

"We see the role of this building as providing an oasis for those affected by cancer, a place of respite in an ever more chaotic and bureaucratic world," added the architecture studio.

Other upcoming Studio Libeskind projects with characteristically angular forms include an archaeology museum in Chile and a paleoanthropology museum on a cliff edge in Kenya.