The concrete and pine kindergarten is one of six structures arranged like a small village around a central "rambla" – a Hispanic term for a promenade or high street.

Alongside the kindergarten, five other modular wood and steel pavilions were transported from two former sites to form the El Tiller Waldorf-Steiner School campus near Barcelona.

This kindergarten structure has been clad entirely in prefabricated panels, consisting of two layers of pine on both the interior and exterior with insulation between.

These panels have been arranged so the pine slats are either horizontal or vertical, creating a an interesting pattern on the facade.

Externally, this wood has been temperature-treated, and over time will turn silvery grey in colour.

"The combination of the thermal insulation of wood-fibre panels, together with the large thermal inertia of the concrete structure, almost eliminates the need for heating in winter," explained Balcells, Rius and Tigges.

Internally, the kindergarten's concrete structure has been left exposed, and deep, wooden window reveals provide space for both seating and storage.

The size of the building's prestressed concrete frame meant that no columns were required – a crucial requirement in particular for the multipurpose hall at ground floor level.

Arranged over two levels, the kindergarten is divided with a large hall and administrative spaces on the ground floor, with classrooms above.

Built against a slope, small bridges connect the upper level with a playground space. To the west, the building faces directly on to the campus' central street. 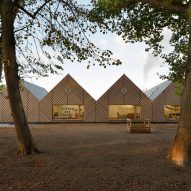 This simple layout minimises the need for circulation inside the building, with the design focusing instead on the journey into the classrooms and the changes in atmosphere and views as children progress through the school.

Waldorf-Steiner schools like El Tiller focus on encouraging children's creativity and imagination, and limit the amount of testing and exams.

"There are no internal corridors, and access to the classroom follows a gradual exterior spatial sequence: rambla, courtyard, porch, reception hall then classroom," explained the architecture group.

"The views expand as the child grows, and the rotation of classrooms on the topography gives them varying light qualities, both in intensity and colour, accompanying the experience of growing up and learning."

The concept of designing a school as a village was also recently explored in China with the Jiangsu Beisha Kindergarden, which looks like a cluster of little houses.