The Amsterdam-based studio headed by artists Lonneke Gordijn and Ralph Nauta adapted the performative artwork to work in time with a performance by British rock band Duran Duran.

The one-time-only custom edition of Franchise Freedom was developed to celebrate the launch of Apollo 11, which landed commander Neil Armstrong and lunar module pilot Buzz Aldrin on the moon on 20 July 1969.

The evening concert was held in the Rocket Garden at NASA's Kennedy Space Center Visitor Complex on Merritt Island, Florida.

"It was like a childhood dream come true," said Nauta, speaking to Dezeen from Florida the morning after the event, held on 16 June.

"It's so humbling to fly your artwork above NASA rockets with astronauts that have been to the moon watching, for the 50th anniversary of what is the most epic achievement of humankind."

The individual drones with built-in LED light sources lifted off from an area behind the stage before forming an aerial swarm intended to represent the tension between individual freedom and safety in numbers.

At a key moment in the song, some of the drones created an image of the moon that the swarm appeared to fly towards before the cluster dispersed again and continued its algorithmically determined flight pattern.

"We would never normally do this with an artwork but this is such an iconic moment we felt we had to have something that refers back to this epic moment in time," Nauta explained.

"It talks about this effort of society, this combined knowledge and interaction to get to the moon because there were 200,000 people involved," he added.

"When they reach the moon the knowledge of the moon landing and all the information they gathered dissolves back into the swarm."

Studio Drift was invited by the Aldrin Family Foundation to be part of the event, which celebrated how technological achievements, both 50 years ago and today, have positively impacted the evolution of humankind.

"The moon landing made us think about our lives here on earth more than life on the moon," Gordijn pointed out. "That's what our work Franchise Freedom is about, human behaviour on earth." 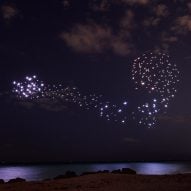 The artwork evolved from a static piece created in 2007 called Flylight, which involved developing an algorithm so light sources contained in glass tubes react to the the viewer's presence by swarming together.

Franchise Freedom uses a similar algorithm and parameters which are choreographed to create pulses of light that evoke the flocking behaviour of birds but can never be precisely determined.

The work was first presented at the Faena hotel complex during the 2017 edition of Art Basel Miami Beach. The piece was also shown at the Burning Man festival in 2018, and alongside a retrospective of the studio's work held at Amsterdam's Stedelijk Museum the same year.

Choreographed drones were also used as a backdrop to Lady Gaga's half-time show at the 2017 Superbowl, and featured in the production of Canadian rapper Drake's Aubrey & The Three Migos tour in 2018.

The future implications of drones for realms including architecture, transportation, entertainment and the military are explored in Dezeen's award-winning documentary, Elevation.