A swarm of illuminated drones staged an aerial routine above Lady Gaga's half-time show at the 51st Super Bowl.

The 300 Intel Shooting Star drones created a light show as they hovered over the singer during her opening number for the performance, as part of the biggest American football game of the year.

Displaying an array of coloured LEDs, the unmanned aerial vehicles (UAVs) moved in formation to create images including the American flag, before Lady Gaga dropped into the arena on a harness and cables.

Technology company Intel claims it was the first time that drones have featured in a televised event.

"Lady Gaga and the Super Bowl creative team wanted to pull off something that had never been done before and we were able to combine Intel drone innovation with her artistry to pull off a truly unique experience," said Josh Walden, senior vice president and general manager of Intel's New Technology Group.

"The potential for these light show drones is endless and we hope this experience inspires other creatives, artists and innovators to really think about how they can incorporate drone technology in new ways that have yet to even be thought of."

Drones are becoming increasingly ubiquitous, with uses ranging from photography and gaming to delivery and transport. They are also being purposed for entertainment, for instance, they were adapted into dancing lampshades for a routine during a Cirque du Soleil show.

The UAV models used for the Super Bowl were purpose-built autonomous quadcopters, programmed to move in sequence and change colour as a cohesive unit.

Lady Gaga is no stranger to technology. In 2013, she piloted the "world's first flying dress" – which its designer Benjamin Males said would herald the beginning of a new era for human flight. 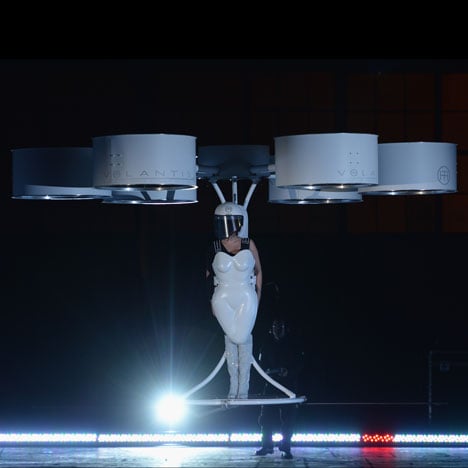