Overgrown concrete pergolas have been installed around Monticello, a brick house restored by Di Gregorio Associati Architetti in northern Italy.

Di Gregorio Associati Architetti has restored and extended the rural house surrounded by vineyards, opening up its interiors to terraces surrounded by large concrete frames.

Leaving the original house's structure largely intact, the architecture studio surrounded three sides of the house with a double ring of concrete trellises.

The inner area forms a glazed extension and the outer structure shields it from the sun, with plants growing down from the concrete frame.

To the north and east, the living space opens out onto seating areas, again sheltered beneath the plants that grow on the concrete frames.

On the west side the plain brick facade of the original building has been retained and large windows introduced.

"The interstitial space is located between the bricks of ancient manufacture and the new concrete frame," said the studio founder Francesco Di Gregorio.

"It ideally represents the intimate relations between past, present and future, which the house is constantly interrogating."

Panoramic views of the surrounding countryside contrast with internal padded fabric panels that  line the walls of the existing brick structure. 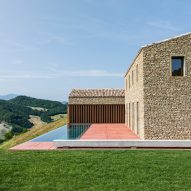 "The perimeter walls of the original volume have been upholstered with German fabric of different colours, alternating with Italian ceramics and quartzite from the nearby Val Taro River," said Di Gregorio.

The ground floor of the existing building has been opened up to create a continuous living, kitchen and dining space, organised around a central core housing a staircase and bathroom and clad in European oak.

Steel and brass details have been used to divide different material finishes of the old and new building, with strips of the metals running along the edges where materials meet.

On the upper level are the bedrooms and an additional bathroom space, which are also accessible via a second staircase at the western edge of the house.

Di Gregorio's previous projects have also involved the conversion of old rural structures. An apartment in Föhr completed with Karin Matz involved transforming the former hayloft of a farmhouse into a living space lined with spotty blue tiles.

Photography is by Hèlén Binet.