Texas architecture studio Clayton & Little has built a barn from reclaimed oil field pipes and weathering steel panels, topped with solar panels to provide power to a vineyard in California.

The Saxum Vineyard Equipment Barn is on the James Berry Vineyard – part of the Saxum Vineyard group – in Paso Robles, a town in central California known for its olive groves, hillsides and wineries. It has been longlisted in the business building category of this year's Dezeen Awards.

Clayton & Little created the simple barn to provide covered storage for farming vehicles, implements and livestock supplies, while also being a structure to hold solar panels to power the nearby Saxum Winery.

The studio describes the structure, which is made reclaimed oil field pipes, as a modern version of a pole barn – a type of agricultural building that began being built in the USA in the 1930s.

The structure is mostly symmetrical with an open central storage area and enclosed rooms for storage on either side. The building is clad with perforated Corten panels that protect the machinery from the sunlight, while allowing the wind to pass through.

On top of the barn's long roof, which is supported by the reclaimed pipes, are a series of photovoltaic panels. These laminated glass solar modules act as the barn's roof, reducing cost as there was no need for a separate structure.

The solar panels offset the electrical demand of the winery, freeing it from the dependence of grid-tied power. Energy from the panels also supports irrigation well pumps at the vineyard. 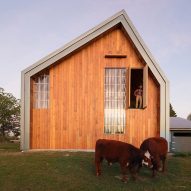 The roof is also designed to collect rainfall for irrigating trees and adjacent grazing meadow, which is stored in cylinders nearby.

This is intended to dramatically reduce the vineyards dependence on mains water, and combined with the solar panels, effectively take it off the grid.

Saxum Vineyard Equipment Barn was awarded as one of this year's AIA Small Projects and joins BIG'S Klein A45 cabin in the Catskill Mountains and South 5th Residence in Austin by Alterstudio Architecture.

Other barns include an oak-clad structure in the Netherlands, Swallowfield Barn in British Columbia and a blackened wood structure by Worrell Yeung in Upstate New York.