Amsterdam architecture studio The Way We Build has built a mobile cabin with a timber domed interior at a campsite within the Robbenoordbos forest in the north of the Netherlands.

The 15-square-metre cabin has been designed as a "meditational nature retreat" at the Het bos roept – which translates as The forest is calling – campsite near the Dutch coast.

"The cabin is meant for metropolitan people looking to rejuvenate close to nature in order to escape the digital pollution of nowadays," said Arjen Aarnoudse, co-founder of The Way We Build.

The simple cabin is constructed from a series of poplar wooden arches that support the building's roof and enliven the interior.

"In the history of religious architecture the dome shape was used as a reproduction of a shelter between the earthly and the supernatural," continued Aarnoudse.

"The form of the arches and the domes help the guests to reconnect with themselves and create positive energy for meditation."

One of the arches springs from a central column that divides a bed space at the rear of the cabin from the compact living and kitchen area. 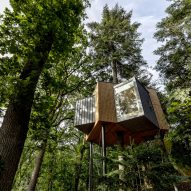 A small toilet is located alongside the bedroom area, while the main space is simply finished with a writing desk and a pair of stools alongside a wood burner.

Two of the cabins walls are fully glazed, to allow visitors staying to look out across the campsite, while the other two solid walls are clad with timber cladding.

"By locating the cabin on the transition zone from the open field to the forest, guests can experience the intimacy of the darker forest and the light and vastness of the skies," added Aarnoudse.

The Way We Build is an Amsterdam-based architecture studio run by Aarnoudse and Farah Agarwal. The studio joins a number of architects designing cabins as get aways.

Sigurd Larsen recently completed a treetop hotel cabin in a Danish forest, while Snøhetta designed a pentagonal walker's cabin near Oslo in Norway.