The Royal Institute of British Architects has announced the six finalists vying for the accolade, which is awarded annually to the building judged to have made the greatest contribution to British architecture.

"These six buildings could hardly be more diverse in typology and scale – from a rustic stable block-turned- theatre to a vast national railway station," he continued.

"But what they have in common – ground-breaking innovation, extraordinary creativity and the highest quality materials and detailing – sets them apart, rightfully earning them a chance to win the highest accolade in architecture."

Two of the projects shortlisted for this year's prize rejuvenated existing structures – Grimshaw's overhaul one of London's busiest stations and Witherford Watson Mann Architects' construction of a opera theatre within a 17th-century stable block in Leicestershire.

Meanwhile, Rogers Stirk Harbour + Partners Macallan Distillery in Speyside and Feilden Fowles visitor centre within Yorkshire Sculpture Park are both designed to merge with their surroundings and ensure there is a minimal impact on their historic landscapes.

The most unusual of the shortlisted buildings is Cork House, which is also on the architecture longlist for this year's Dezeen Awards. The residence is made from a self-build construction kit of sustainable cork parts and has a low whole-life carbon performance.

It is one of two residential projects that made the shortlist, alongside the energy-efficient council housing by Mikhail Riches and Cathy Hawley in Norwich.

Derbyshire said that this is a demonstration UK architects' ability to tackle "the most pressing challenges of our times", such as the climate and housing crisis.

"Given the fact the UK faces the worst housing crisis for generations and a global climate emergency, we must encourage their architectural ambition, innovation, bravery and skill," explained Derbyshire.

"From the way that Cork House experiments with entirely plant-based materials, to Goldsmith Street’s ultra-low energy affordable homes, each of these six buildings push the boundaries of architecture, exceeding what has been done before, and providing solutions to some of the most pressing challenges of our times." 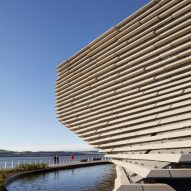 RIBA reveals the best of British architecture for 2019

The shortlist is drawn from the 54 winners of the RIBA National Awards 2019, which celebrates Britain's best new buildings.

For Feilden Fowles Architects, Matthew Barnett Howland with Dido Milne and Oliver Wilton, Mikhail Riches with Cathy Hawley, it is the first time on the Stirling Prize shortlist.

Rogers Stirk Harbour + Partners has now been shortlisted seven times. It has also won twice, once in 2006 for Barajas Airport and again in 2009 for Maggie's Centre London.

Witherford Watson Mann Architects also won the Stirling Prize in 2013 for Astley Castle, while Grimshaw has been shortlisted for the Eden Project in 2001 and Amsterdam Bijlmer ArenA in 2008, but missing out on the prize both times.

Several well-known projects missed out on the shortlist, including the V&A Dundee by Kengo Kuma and Coal Drops Yards shopping centre by Heatherwick Studio at London's King's Cross.

Peter Zumthor's Secular Retreat, which is shortlisted for RIBA's House of the Year 2019, also missed out on a place.

The winner of the 2019 RIBA Stirling Prize will be announced on Tuesday 8 October 2019 at the Roundhouse in London.

Last year the prize was awarded to Bloomberg by Foster + Partners, which was picked from a shortlist dominated by buildings commissioned by universities. In 2017, dRMM received the award for Hastings Pier and the year before Caruso St John won for Newport Street Gallery.