Mexican studio WeWi aimed to replicate a "magical hidden beach" inside this restaurant in Cancun, Mexico, which features greenery growing from large colourful concrete pots and metallic objects hanging from the ceiling.

Drawing on this mix of cuisine, WeWi designed the interiors to team the roughness of Hawaii's rugged landscapes with local, Mexican materials.

The floor, walls and ceiling of Maku are covered in a pale chukum – a traditional plaster that is made from tree resin and limestone. The studio likens the backdrop to the "smooth atmosphere of the Mexican Caribbean beaches".

Chukum is ancient stucco formula that was originally used by Mayans to seal water cisterns. It has seen a revival in a number of contemporary projects in Mexico, including the Jungle Keva and Punta Caliza hotels in Tulum.

To contrast this, the studio made the large pots and the serving counter from layers of rough, pigmented concrete.

"The over-scale plant pots and the bar are made of layered concrete in different colours to reference Hawaiian landscape and add roughness to contrast the softness," said WeWi in a project description.

As the height of Maku increases in the middle of the space, the smooth render runs only partway up the wall to reveal the existing brickwork and metallic structure – which is now painted white – behind it. 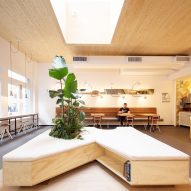 A series of geometric brassy metallic objects, cut into shapes like semi-circles and squiggles, hang down from the highest point of the ceiling.

"The ceiling has a heights-game with decorative objects at some parts to give different spatial sensations and a dreamy atmosphere," said the studio. "All this to create the idea that Maku is a magical hidden beach."

Furnishings in Maku comprise a mix of curvaceous benches and seats covered in a pale textile, alongside rounded wooden tables and chairs. The latter are made from locally sourced bojon wood, which features a boldly layered grain.

Poke has grown in popularity over the years, with a number of new eateries serving up the cuisine. Others include a restaurant in Lower Manhattan that is outfitted with pieces from low-cost retailer Home Depot and Berlin's LA Poke, which takes its cues from Hockney painting A Bigger Splash.