Designed for an author seeking a change from inner-city life, the architecture studio created Springhill House as a rural retreat and place for reflection. The house has been longlisted for a 2019 Dezeen Award.

Combining the forms of nearby agricultural sheds with more typical Australian house typologies, Springhill House's circulation has been pushed to its perimeter to create a veranda sheltered by an arcade of wooden columns.

Parts of this semi-exposed loggia have been left open to the surrounding landscape, while areas more vulnerable to the elements have been covered with steel panels.

"At the beginning of the project we spent a lot of time on site in different weather conditions getting an understanding of how the site behaved," practice founders Joseph Lovell and Stephanie Burton told Dezeen.

"Large eaves to the west and north provide shading to the windows while also providing external undercover areas. To the south the dwelling is pushed against the columns to provide a barrier from the prevailing south west winds."

Materials have remained true to the simple, agricultural feel of the project. A concrete slab provides the foundation and has been burnished for the floors. The timber structure has been left largely exposed, along with the corrugated metal roof. 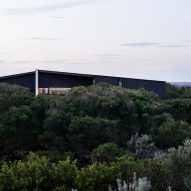 Steel panels along Springhill House's facade protect the house from the weather and reflects the colours of the landscape.

The spaces of the home sit within this sheltered outer layer, designed to merge into one another and serve multiple functions.

A central core of bathrooms sitting back-to-back with the kitchen. The remaining shared space is a flexible living, kitchen and dining area which can be divided using a curtain to create a yoga studio or guest bedroom.

The master bedroom sits at the east of the home to benefit from morning sunlight, and work spaces look out towards the south.

To the north, a large sliding door opens the living space out to the landscape, blurring the permeable boundary between the home and the surrounding paddock.

Ideas of climate and shelter have also been key to Lovell Burton's previous projects, including a home near Melbourne with slanting forms to offset strong winds.

Galvanised steel is a facade finish that can be just as home in an urban setting as a rural one. Glow Design Group used it in corrugated form for a house also near Melbourne, while Yuichi Yoshida & Associates clad a house in the city of Kanazawa, Japan, in the metal panels