Architecture firm Morphosis has unveiled its design for a sculptural, plant-covered museum in Los Angeles dedicated to the cultural heritage of Koreans living in America.

The Korean American National Museum will be built on the corner of 6th Street and Vermont Avenue in the city's Koreatown, and focus on preserving, studying and presenting Korean-American culture.

Exhibitions and activities will trace the story form first Korean immigrants into the US to contemporary contributions of Korean Americans.

'This building will stand as a vital institution for the millions of Korean Americans who have made this country their home, and will beautifully represent the strength and accomplishments of our community," said museum vice-chair Jae Min Chang.

Morphosis' founder, Pritzker Prize-winning architect Thom Mayne, is leading the project with firm principal Eui-Sung Yi, a Korean-American architect. To follow the theme of the museum, their design aims to incorporate Korean culture through architectural elements, landscape and the organisation of spaces.

"This museum honors the sacrifices and hardships of our parents and grandparents, while showcasing the fruits of those sacrifices: the accomplishments of future generations," said Yi in a project statement.

"We aimed to reflect this sentiment in our design." 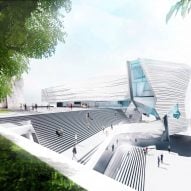 The museum's design comprises a long slender volume topped by a scooped concrete "crown". This structure will be capped by garden, featuring plants found in the Korean landscape, such as maple, pine and bamboo.

Additional trees and greenery will wrap around a large roof terrace on the lower volume, and extend over the street-facing facade, which will also be patterned with a traditional Korean motif.

The museum's galleries, meeting rooms and offices will be arranged in a ring around an open central space, drawing on the courtyard layout of the traditional Korean house, known as a Hanok.

Renderings show that the inside will feature white, curvaceous walls and high, sculptural ceilings, pared with dark-toned flooring. The spaces are expected to culminate in a triple-height gallery. 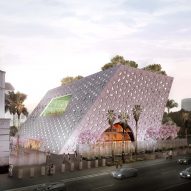 Construction on the Korean American National Museum is expected to begin next year, with the project's completion slated for 2022.

It will mark the first permanent home of the institution, which was founded in 1991, and has previously used other museums, along with universities and cultural centres to host its events and exhibitions.The State of California has awarded $4 million (£3.2 million) to the museum to help fund the new museum project.

Founded in 1972, Morphosis has completed a number of cultural and educational buildings under its belt, including the Perot Museum of Nature and Science in Dallas and the Emerson College campus in LA.

It also recently unveiled the new home for Orange County Museum of Art in California.