The church of Seliger Pater Rupert Mayer in the town of Poing, near Munich in Germany, is topped with a ceramic crown clad with 15,000 white, three-dimensional tiles.

Munich studio Meck Architekten designed the rectangular church, which can accommodate 220 worshipers, to be a landmark in the growing town.

The church dedicated to a German priest named Rupert Mayer, who was a leading figure in the Catholic resistance to the Nazis in Munich, has two visually distinct elements.

Its single-storey base is made of grey stone blocks constructed from molasse – a type gravel that is found in the region, while the sculptural roof is entirely clad in reflective white tiles.

"Above the base, as an impressive and easily identifiable landmark of the new parish church, soars the white ceramic-tiled roof, unfolding with sculptural energy," said Meck Architekten.

"The contrast between the ethereal white crown and the stone foundation represents a vision of heaven and earth, of transcendence and immanence, and it is in this field of tension that the church space is anchored."

The roof is formed of four geometric elements that give the building a sculptural appearance.

Meck Architekten designed the church with no steeple so that it didn't compete with a nearby evangelical church, however one corner of the building rises higher than the other and is topped with a cross and a weathercock.

The form of the sculptural roof, which is supported on a steel cross that spans the church, forms the "baroque-like" roof of the main worship space. Three of the roof's geometric forms contain skylights, with the highest one directly illuminating the altar.

"Entering the church space with its slight slope towards the altar, after a lower entry area, a room of light opens up, baroque-like, urging one's view heavenward," said the studio.

"This, in construction as well as symbolically, is composed of a spatial cross that manifests itself as a powerful image in the shape of the ceiling's spacial folding." 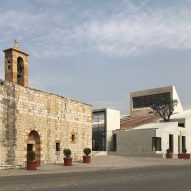 The tiles used to clad the building have a similar form to that of the building's roof, with each individual tile divided into four geometric sections.

"The ceramic tiles were an idea developed in the planning process. The idea is to create a shiny surface within the white ceramic-tiled roof, unfolding with sculptural energy," explained the studio.

"The specially sculptured execution of the ceramic tiles is coordinated with the light and space concept of the church room and creates manifold light refraction with its strongly differentiated geometry. Playing with the light in this way, the roof landscape becomes the crystal 'city crown' of the town of Poing."

Photography is by Michael Heinrich and Florian Holzherr.