Artist Olafur Eliasson and architect Carlo Ratti have collaborated on a celestial mapping robot that brings together their hit design brands Little Sun and Scribit.

The product of the collaboration by the two creatives is a small robot that produces an illustration inspired by Eliasson's social enterprise, Little Sun.

Scribit is a drawing robot that turns any wall into a write-and-erase board. The robot can move across any vertical surface drawing an image in marker pen from digital information that it has received.

It is also able to remember where it has travelled and go over the marks at a later point to erase them.

In this case, the robot has been programmed to make an ever-changing chart showing the position of the sun in the sky, with the celestial body represented by a yellow-petalled disc, that resembles the Little Sun lamp.

Invented by Carlo Ratti Associati and spun off into its own start-up, Scribit is also one of the most successful crowdfunding projects in the history of Kickstarter, raising over 2.4 million US dollars. 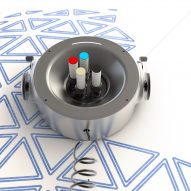 To create an illustration, users choose a location, date and time for the specific position of the sun they want to capture, through Scribit's accompanying app.

They can update this input as often as they like, to chart the course of the sun.

Eliasson sees the collaboration as an extension of the company's mission to spark dialogue on the topic of energy access and climate change.

"Energy shortage and unequal energy distribution demand that we reconsider how our life-sustaining systems function," said Eliasson. "I see Little Sun as a wedge to open up this urgent discussion from the perspective of art."

"We are excited about the collaboration with Scribit, because it is a completely new way of connecting the global community, making the power of the sun tangible for everyone," added Little Sun Foundation managing director Felix Hallwachs.

The Little Sun illustration is the first in a series called Scribit Originals, which will feature work by well-known artists, poets and designers made specifically for the little robot.

Sometimes described as a vertical plotter or a low-refresh screen, Scribit is designed primarily for home and office environments, where it can create representations of images from the internet, user-generated content or art.

It is one of several inventions to come out of Ratti's work at Carlo Ratti Associati as well as his research at MIT's Senseable City Lab, which he heads. Others include Makr Shakr, a robot bartender.