Rome is trialling a scheme where people can recycle plastic bottles in return for free rides on the city's public transport system.

Called + Ricicli + Viaggi, or + Recycle + Travel, the recycling scheme accepts PET plastic bottles which are collected and sent for processing.

Machines at three metro stations in the city exchange one plastic bottle for €0.05 in credit, making a €1.50 journey worth 30 bottles.

"We can say we are the first major European capital to present this innovation," Rome's mayor Virginia Raggi said at the launch of the recycling scheme.

"A machine that eats plastic bottles and issues a credit with which to buy bus tickets. The circular economy is easy to do."

Atac, which runs Rome's public transport network, will credit accounts with an "ecobonus" on the online ticket purchasing apps MyCicero and TabNet when users insert plastic bottles into the machine. 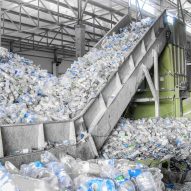 "It will be possible to reward responsible behaviour from an environmental standpoint and retain customers who use the mobile channel," said Atac.

The pilot project is being run by the local authorities for a year to see if it improves recycling levels and discourages fare-dodging.

The recycling scheme could also help address Rome's rubbish problem. Refuse has been piling up in the streets over the summer while nearby rubbish dumps are closed for maintenance.

As climate change and plastic pollution put increasing strain on cities around the world people are trying to devise solutions.

Finland has pledged to go carbon neutral by 2035, and Paris has planned to start planting trees in front of its landmarks to improve air quality.

One designer has made a tricycle from recycled plastic waste found in Mexico City, which could be ridden to help reduce the city's traffic congestion.

Main image is by Hans via Pixabay.