Google has released a beta feature for its Google Maps service called Live View, which uses augmented reality to show users which direction to walk in.

Launched on 8 August, Google's Live View mode uses the phone owner's camera, location data and visual information from Street View to tell them where to go when exploring an unfamiliar city on foot.

To use the augmented reality (AR) feature, the user simply holds their phone up to their surrounding environment and selects Live View in Google Maps.

Giant arrows, directions and street names pop up on the user's phone screen, overlaid on the scene in front of them as if in the real world, to guide them in the right direction.

While Google has been trialling its Live View mode with Local Guides reviewers and Google Pixel owners since March this year, the new feature has been rolled out to all users last week.

People with Android and iOS devices that support Google's ARCore and ARKit technology – in countries where Street View is available – will now be able to test out the AR mode for themselves.

The latest AR feature is just one in a series of upgrades to Google Maps. Users can now also use the app to keep track of their flight and hotel reservations with the new Reservations tab, which also works offline.

They can also find restaurants tailored to their tastes using the new Your Match feature, as well as seeing how long the wait is, and booking a reservation without having to leave the app.

An updated version of the Timeline feature also enables users to look back at the exact locations of restaurants and shops they visited on their trips, and share any recommendations with friends and family. 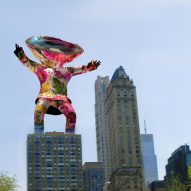 These updates are part of a wider effort from Google to encourage users to plan all their trips via the app.

The Apple [AR]T experiences will feature works by seven artists that have been selected by New York's New Museum, including a large alien-like creature that can be spotted dancing atop city buildings, designed by American artist Nick Cave.