Austrian design firm EOOS and a Swiss water research institute have teamed up to create a toilet for Laufen that tackles the "urgent" environmental issue of pollution caused by wastewater.

EOOS, bathroom brand Laufen, and the Swiss Federal Institute of Aquatic Science and Technology (EAWAG) created the Save! separation toilet with a trap to siphon off urine that can then be turned into fertiliser.

By trapping the urine – which contains a high number of nutrients – the device allows the liquid to be repurposed.

"A series of studies by leading scientists rank excessive nitrogen levels caused by sewage and the agricultural use of fertilisers as more threatening even than rising CO2 levels and climate change," said Laufen.

"If the different types of wastewater are kept separate rather than mixed, these different streams can be sustainably processed and usable resources can be extracted," the brand explained.

In order to separate the urine, EOOS has designed an internal curved section to catch liquid onto and around the bowl. This "urine trap" keeps it separate from the stool.

The design is intended to be as discrete as possible, but requires its user to always sit down.

Urine's nitrogen, phosphorus and potassium counts make it a good fertiliser and compost accelerator, but it needs to be treated first to remove residual contaminants.

As part of EAWAG's research, the trapped urine is to be treated with decentralised reactors that remove micro-pollutants and residues from the urine, and recover nutrients.

The end result is a fertiliser called Aurin, which the Swiss Federal Office of Agriculture has endorsed for usage on all plants.

EOOS, Laufen and EAWAG hope that the device can also address the high levels of pollutants that current disposal systems release into the environment.

These include hormones, bacterias and medical residues, as well as nitrogen and phosphorus, that enter the water system through human waste.

According to the team, the disposal of human waste has changed very little in centuries, and is a major contributing factor to one of the most urgent environmental issues facing the planet.

"Wastewater management is vital if we are to prevent catastrophic damage to the world's rivers and oceans," said Tove Larsen from EAWAG's Department for Urban Water Management. 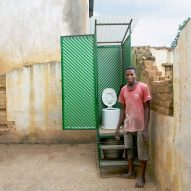 A similar process of separating waste and treating urine for fertiliser is already being used at a number of residences across Vermont. The scheme is implemented by Rich Earth Institute, and homeowners store the separated debris on-site to be collected weekly.

The Save! separation toilet is intended as a development of EOOS and EAWAG's Blue Diversion Toilet from 2015, which features a built-in filtration system to improve sanitation in areas of extreme poverty.

The designs are funded by the Bill & Melinda Gates Foundation, headed up by the US billionaire Bill Gates of Microsoft, which is also currently developing a source-separating toilet.

Another toilet designed by LooWatt collects human waste and turns it into electricity and fertiliser.

Photography is by Laufen.