Billionaire Bill Gates has partnered with electronics company Samsung to create a prototype waterless toilet for household use that turns solid waste into ashes.

The toilet was developed as part of the Bill & Melinda Gates Foundation's Reinvent the Toilet Challenge – an initiative that started in 2011 that sought proposals for toilets that safely and effectively manage human waste.

The Microsoft founder worked with the research and development arm of Samsung Electronics to design the waterless toilet, which uses heat-treatment and bioprocessing technologies to kill pathogens found in human waste.

"The system enables the treated water to be fully recycled," explained Samsung. "Solid waste is dehydrated, dried and combusted into ashes, while liquid waste is treated through a biological purification process."

"The core technologies developed by Samsung include heat-treatment and bioprocessing technologies to kill pathogens from human waste and make the released effluent and solids safe for the environment," the brand added.

Left untreated, the nitrogen and micro-pollutants found in human waste and sewage can be harmful and dangerous to both people and the planet.

The prototype toilet, which Samsung Electronics described as "energy-efficient" is designed to run without water. It could be particularly useful in remote regions where water is scarce.

"Flush toilet hasn't changed much" since its invention

According to the Bill & Melinda Gates Foundation, the disposal of human waste has changed very little since its inception and is a major contributing factor to many significant health issues facing humanity.

"The flush toilet hasn't changed much since it was invented in 1596 by Sir John Harington," said the foundation in a statement.

"There have been other advancements – waste treatment plants and underground sewers – but these complicated, expensive, and hard-to-manage technologies don't do much good in developing countries where 950 million people still have to defecate outdoors." 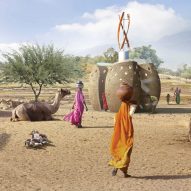 Meanwhile, the World Health Organization and UNICEF estimate that around 2.8 billion people globally are forced to use unsafe sanitation facilities around the world which can lead to diarrheal diseases and even death.

Efforts to make safe and sanitary toilets for remote, low-resource areas with little access to water and electricity or traditional waste disposal techniques pose a unique challenge for designers.

LooWatt designed a toilet that can be flushed without water for regions where water access is limited. The product safely disposes of human waste that can be turned into electricity and fertiliser.

The Bill & Melinda Gates Foundation also helped to develop the Save! separation toilet, a toilet with a trap to divert urine that can then be turned into fertiliser by Austrian design firm EOOS and the Swiss Federal Institute of Aquatic Science and Technology.

The images are courtesy of Samsung Electronics.