An undulating golden facade wraps around the 6,700-seat Chimelong Theatre on Hengqin Island in China, which Stufish has designed to evoke the form of traditional circus tents.

Located south of Macau, the giant circus theatre was built by entertainment architecture studio Stufish to replace the Chimelong Hengqin International Circus City that was irreparably damaged by a typhoon in 2016.

It is characterised by its exaggerated, rippling form that is intended to echo a circus tent and the fold of the stage curtain, but with a permanent structure that can withstand the country's typhoon seasons.

"The circus tent is a historically iconic expression, one that universally signifies the type of show within," said Stufish partner Maciej Woroniecki.

"When we approached the concept for the theatre we had a simple goal, design a modern circus theatre able to withstand the environmental seasonal demands of typhoons while retaining the iconic lightweight expression of the tent," he told Dezeen.

The size and form of the theatre was largely dictated by the need to ensure that changeover between performances is efficient while meeting fire safety regulations. 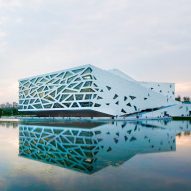 Its exaggerated facade was extended and extruded to enclose protected stair cores, while the surrounding stepped plaza invites visitors to enter at ground level, and exit onto the elevated level above.

Those leaving the circus are then brought back down to ground level by two theatrical staircases flanking the site.

"This was the first theatre Stufish has completed where the audience enters at ground level but then exits en-masse at an elevated level," added Woroniecki.

"When considering that 6,700 people would exit at the same time, it required the design to support an elevated plaza."

The plaza is adorned with playful patterns and circus-themed motifs finished in blue and red, complemented by the theatre's bright gold facade. The three bold colours were chosen by Stufish as shades that represent circus theatres.

Gold was chosen as the main colour for the facade as it was the "least dominating in the context", but hints of red and blue are also incorporated into the facade, and reveal themselves from certain angles.

Stufish Entertainment Architects is an entertainment architecture and set design studio with offices in London and Hong Kong. The Chimelong Theatre is one of many permanent projects designed by the studio, including the Han Show Theatre in Wuhan.

In 2018, China became one of the most prolific countries for architecture as cities all over the country experienced rapid development.

Photos are courtesy of the Chimelong Theatre.