Samira Rathod Design Associates have completed a terracotta school building in Gujarat, India with lopsided vaulted roofs that take their shape from a child's doodles.

Called the School of Dancing Arches, the buildings sit surrounded by tobacco fields near the town of Bhadran in the Indian state of Gujarat.

The school was conceived as a series of separate modules connected via a long, arcaded corridor, creating a variety of spatial encounters across the site.

"The design of the new school grew organically as a series of classrooms that dance their way through the trees, encountering alcoves, cracks and crevices, projections, niches, inhabited bridges, boxes and mezzanines," said the architects.

The classroom blocks all follow the same structure, housing two rooms split by a central corridor. These units sit at the north of the site, while to the south is an office and temple space.

"All the modules are designed to create a repeated use of shuttering material, made from waste steel, which can be arranged in various patterns as seen fit," said Samira Rathod Design Associates.

Inside the classrooms, angled roof beams are straddled by jack arches, with some left open to create skylights.

Coated to appear smooth on the inside, these arches form what the architects describe as a "playful broken brick landscape" on the roof.

The main corridor is one long, slightly kinked two-storey space topped by sections of an uneven vaulted roof. It is open to the surrounding landscape via a series of uneven arched openings at ground level and square openings above.

Drawing on the "maze-like" nature of the town of Bhadran, this corridor is intended to inspire students to explore and "meander", with the spatial experience of the school going beyond just the classrooms themselves. 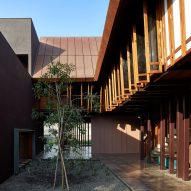 "The sharp, dark shadows of the irregular arches in the corridor, the soft glow of tangerine through the lopsided vaults, and beams of light through the slits and skylights in the classrooms add to the experience, generating intrigue," said the architects.

The "scribble" motif of the rooflines and openings has been carried through into interior details, such as the bent steel and wobbly wood balustrades and even the small hooks that form part of the door-locking system.

Throughout, terracotta has been used as the primary material for bricks, roof tiles, floor and other finishes, to unify the whole project.

"Sourced from a kiln close to site, it is a love of labour from the town and the craft they bring with themselves that lends the building its immaculate semantic and precision," said the practice.

Previous projects by Samira Rathod Design Associates include the Shadow House in Alibag, shaded from the sun by a sloping weathering-steel roof.