Fish with migration paths blocked by a dam can be shot over the top via the Whooshh Passage Portal technology after being sorted by artificial intelligence.

Whooshh Innovations is a Seattle-based company that is developing better technology to help fish migrate over dams. The Whooshh Passage Portal is their latest all-in-one system for fish passage.

Dams block rivers to create hydropower, which is a source of sustainable energy, but they stop fish being able to swim back upstream to where they spawned in order to reproduce.

"New ways of thinking are needed for this problem," Mike Messina, a director at Whooshh Innovations, told Dezeen.

"Where we have seen so many other fields benefit from clever design and technological innovation, when it comes to fish passage the technology has remained the same for 60 years."

The modular, portable system offers a faster and less arduous alternative to fish ladders or fish being transported in tanks by trucks or helicopters.

Fish swim into the system mounted on a floating pontoon via a ramp, which then slides them back down into a scanner.

The scanning machine takes 18 rapid-fire images, measuring the length and girth of each fish to determine whether they are from a hatchery or wild, or even an invasive species.

The artificial intelligence (AI) sorts the fish accordingly, with invasive species released, and the remaining fish routed according to their size.

Using AI means the system's scanning and sorting algorithms can be improved and updated easily, and the fish don't need to be handled by humans.

Corralled into a plastic tube, differential pressure is used to push the fish gently but quickly up the tube and over to the water on the other side where they are deposited into the stream.

"The soft flexible tube is misted every 1.5 metres," said Messina. "The mist is important so that the fish can glide, still exchange oxygen through it’s gills, and have the colder water they typically seek."

Depending on the length of the tube the journey takes around 10 to 20 seconds.

"It is important to recognise that they are on a migratory journey to spawn. For a fish carrying anywhere from 3000 to 5000 eggs, a gentle ten-second glide is far superior to a day straining to climb a concrete fish ladder or being handled by humans to be transferred into a truck."

Fish ladders are a long and arduous journey for fish, who navigate by seeking colder water and can become confused and vulnerable to predators.

The Whooshh Passage Portal is also more sustainable in terms of water use. 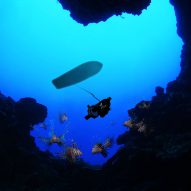 "Our systems use very little water. Fish ladders require five to 10 per cent of a river's flow to go down them at all times," explained Messina.

"Using Whooshh, that five to 10 per cent can now be redirected to more irrigation, or to increased carbon-free hydropower production," he continued.

"It's like adding a turbocharger to an already-existing engine – you're able to squeeze a bit more power out of what you already have."

In the future the system could also be applied to situations where climate change affects water levels and hinders fish migration.

"Technology is available to really make a difference in bringing benefit to nature," said Messina.

In Bermuda, a team of scientists are using an undersea robot to catch lionfish, which are an invasive species that threatens the local marine life.