Troubled Scandinavian design retailer Skandium has been acquired by a Danish duo, who have reopened the e-commerce site and plan to open a new showroom on London's Brick Lane next month.

The company, which went into administration in May, has been bought by Rasmus Warnke Nørregaard and Jacob Kam, the Danish entrepreneurs behind online design marketplace Everclassic.

Nørregaard and Kam quietly reopened the e-commerce function of the Skandium website at the beginning of the month and plan to open two stores in London. However the brand's previous shops will not be reopened.

The new owners have pledged to "keep all the strong characteristics of the Skandium brand", while turning the company round.

"We have the ambition to make Skandium a viable business which will grow into something stronger than it has been until now," said Kam in a blog post published on Skandium's website.

"We both have the love of beautiful design running in our veins and a strong network among the most important suppliers," added Nørregaard.

Showrooms in east and west London

Nørregaard told Dezeen that they also plan to open a bricks-and-mortar showroom on east London's Brick Lane in the next month or two, with another to follow in west London in the near future.

The Kensington store will likely occupy a different location from the Skandium Townhouse that was opened in the west London in 2017 by the company's previous owners.

"The terms to continue the lease were stupid, it was too expensive," Nørregaard told Dezeen. "I also think that we need a new start, as some people had a bad experience with Skandium because of this bankruptcy, so we've let it go."

The location of the other Skandium store in Marylebone also proved too expensive.

"The location is important, but it's also important that you stick to some main brands and don't try to be everything," said Nørregaard.

The pair were contacted by the administrators, having shown some interest in Skandium before it folded in May. They bid along with other interested parties and were successful. 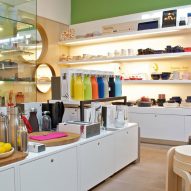 "Particularly the online business at Skandium.com has a solid revenue and is making a profit, in isolation," explained Kam in the blog post. "So we are convinced that with our expertise, with significant capital to boot, we will be able to serve our customers and make Skandium a modern business."

The warehouse in Biggleswade, Bedfordshire, will remain, and new staff are being hired to handle orders and manage customer service.

Furniture and larger pieces will be displayed in the new showrooms, which will also host events and talks, with smaller items mainly confined to the online shop. Nørregaard and Kam also intend to push the social media presence of the brand.

Skandium closed the e-commerce function of its website and its two London stores in May this year, before entering administration. Forty members of staff were believed to have lost their jobs.

"Sadly, the majority owners who took over in 2016 put the company into administration today," co-founder Magnus Englund wrote on Facebook at the time. "Staff, suppliers and customers deserved better."

The company was founded in 1999 by Englund, Christina Schmidt and Christopher Seidenfaden. Englund and Schmidt left the company in 2016 on the wishes of the majority investors, although the pair retained a 48 per cent stake in the business. Seidenfaden remained with the company until its bankruptcy.

The company previously operated a concession in Selfridges and a Fritz Hansen-branded store in Fitzrovia.