An Italian court has fined Santiago Calatrava €78,000 for negligence during the design of the glass and steel Ponte della Costituzione over the Grand Canal in Venice.

The Court of Auditors ruled that the Spanish architect was responsible for decisions that led to the 94-metre-long pedestrian bridge being over budget and incurring higher that predicted maintenance costs.

According to the BBC, the court accused Calatrava of "gross negligence" stating that the steps, which are made from tempered glass, wore out too quickly, while amends were needed to make the bridge accessible for wheelchairs.

A representative for Calatrava told Dezeen that he rejected the accusation of negligence and that his legal team would consider appealing the ruling.

"Santiago Calatrava's legal reps are analysing the court decision in order to study the possibility of an appeal," said the representative.

The latest ruling overturns a decision made in 2015 by a lower court that cleared Calatrava. Salvatore Vento, a Venetian engineer who worked on the bridge was also fined €11,000 by the court.

Completed in 2008, the 94-metre-long bridge was the fourth to be built over Venice's Grand Canal since the 16th century, however, it has been controversial since it opened.

The bridge, which is located near the main train station, was initially criticised for the lack of wheelchair access, although Calatrava had initially proposed incorporating a stairlift in his design.

This led to the construction of a mobility lift alongside the bridge that was completed in 2013. However, issues with the lift have meant that it is now set to be removed, with the Court of Auditors ordering the city to close it in April this year.

The bridge's tempered glass steps have also been controversial, with reports of them becoming overly slippy during rain. However, according to local police reports the bridge is equally as slippy as other bridges in the city.

Although the steps were designed to last 20 years, many of them have already had to be replaced.

Errors "all the more serious" as Calatrava so experienced

Calatrava is an experienced engineer and architect who has created more than 40 bridges, including the Alamillo Bridge in Seville, Bac de Roda Bridge in Barcelona and the Jerusalem Chords Bridge.

This track record made the errors "all the more serious", said the court, which described Calatrava as "a respected, world-famous professional, with a very high level of competence, with wide and proven experience in bridge construction," reported the BBC.

Originally known as Quarto Ponte sul Canal Grande, due to the fact it was the fourth bridge across the canal, it was later renamed Ponte della Costituzione to celebrate the 60th anniversary of the Italian constitution.

The steel-arched truss bridge is well used by tourists as it connects the railway station with the bus terminal in the Piazzale Roma.

The steps that make up the bridge's deck are made from tempered glass, with some steps made from stones to match the pavement on either side of the crossing.

This is not the first time that a structure designed by Calatrava has come under scrutiny for cost overruns or reported construction defects.

In Bilbao another bridge designed by the architect, named Zubizuri, has also been widely criticised for its slippy glass-tile deck. A non-slip carpet was later installed across the bridge deck. 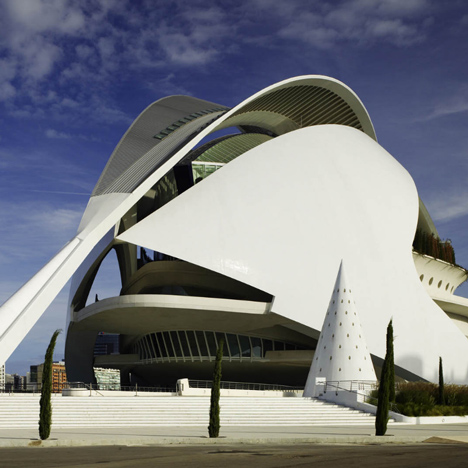 In 2014 the architect faced legal action from the city of Valencia after tiles fell of the Palau de les Arts Reina Sofia opera house in the City of Arts and Science during high winds. However, it was determined that the issue was with the subcontractor not Calatrava.

Calatrava previously faced legal action over a leaky roof at the Ysios winery in Spain, while the the ceiling of the  World Trade Center Transportation Hub in New York sprung leaks in 2015, and again in 2017.