Gonzalez Pulido oversaw the design of the sports complex's roof, using angular forms that are meant to evoke the baseball team's trident logo.

Cantilevered canopies cover 11,500 of the seats, which are laid out on two sides of the baseball diamond behind the batter. The other two sides contain 8,500 seats that are left exposed to the elements.

"The roof is meant to become an iconic symbol of the great city of Mexico," said Gonzalez Pulido.

The gabled forms are built of large steel trusses that hold sheets of polytetrafluoroethylene (PTFE) – a synthetic material that is waterproof and slightly translucent – taut. Their slopes are used to gather rainwater runoff in the deep cracks, which is processed and reused on site.

Los Diablos Rojos' stadium is located within the Magdalena Mixhuca sports complex, which was originally built for Mexico City's 1968 Olympics, and now serves as a public venue for athletic and cultural events.

The plaza is delineated by six truncated pyramids that house auxiliary spaces and support the roof's heavy structure. Traditional Mexican architecture influenced the design of these plinths, which are clad in prefabricated concrete panels that incorporate local volcanic stone. 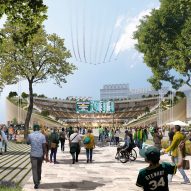 "The procession from the stadium's grounds into the ballpark is reminiscent of entering an ancient ​Mesoamerican temple," said the studios.

Other public amenities surrounding the main stadium include an outdoor market, batting cages, and an organic garden. "The ultimate goal is the realisation of a great public arena, where the open space is as important as the built space," said the architects.

The Alfredo Harp Helú Stadium was completed earlier in 2019 and inaugurated in April, five years after the start of construction.