Pina and Costa completely refurbished the property, now known as MCR2 House, so that it could be used as a holiday home, a guesthouse or as a permanent residence.

Aiming to retain the "humble character" of the original, century-old building, they demolished a 1950s annex and replaced it with an extension that more directly matches its neighbour.

The new addition mimics the proportions of the farmhouse building and they both share a new roof.

However the architects chose a more contemporary material palette for the extension, so that both sides of the building have their own distinct identity.

One side is the restored stone, while the other side is clad in corrugated metal.

"The pre-existing building was maintained and the idea of the annex proved to be a starting point for the concept of the project," explained the architects. "In the absence of space, an adjacent space is built."

"In materiality, the new and old were distinguished, sheltered under the same roof: the stone and the corrugated sheet, side-by-side and in continuity," they added.

The house is located near the Serra da Estrela mountain range in the east of Portugal. It was originally built in the early 20th-century and would have been used for both residential and agricultural activities.

The renovation has kept the interior layout very simple, with living spaces in the new part of the 140-square-metre building and bedrooms kept to the older part of the structure.

There are three bedrooms in total, although there is also a storage space that could be converted into a fourth. 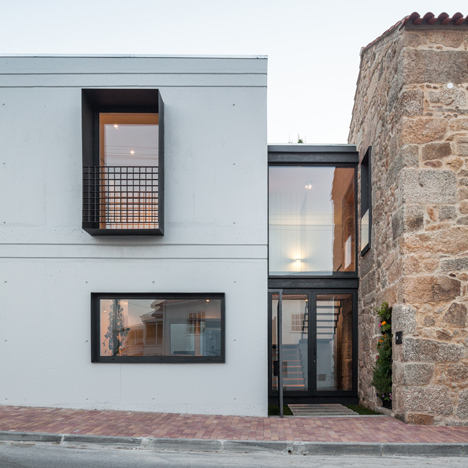 Not all of the rooms connect internally. On the ground floor, a bedroom can be accessed directly off the kitchen, although both rooms have their own entrance, and the storage room is completely separate.

Similarly, the upstairs living-room leads through to one of the two bedrooms on this floor. The other is accessed via a stone staircase on the outside of the building.

Unlike the exterior, the interior of the building is completely contemporary. Walls and ceilings are either painted white or covered in plywood panels, while the kitchen features a concrete counter and pale pink tiles.

Simple lighting fixtures were chosen, along with a wood-burning stove that functions as a visual feature.

"The neutrality given by the simplicity of the materials and the illusion of the absence of detail was sought," said the architects.

"The idea of interiority is conveyed in the use of the openings, strategically located towards the landscape, and by the punctual use of wood."

MCR2 House is not the first project Pina and Costa have collaborated on. The two Portuguese architects previously teamed up on House JA, a house renovation and extension project in the city of Guarda.