Major high-rise developments are razing the architectural past of Los Angeles at a rapid rate, says the production designer behind the 1960s sets of Quentin Tarantino's movie, Once Upon a Time in Hollywood.

Production designer Barbara Ling said that creating the sets for the summer blockbuster highlighted the fast pace of development in the city.

"Los Angeles has always been a city ever transforming itself," Ling told Dezeen in an interview. "We've never held on to the past. With every year that goes by, we tear down more of the previous year. "

"Even as fast as we could build and shoot this film, things were being torn down around us with high-rises, and glass and steel buildings going up in their place," the Angeleno added.

Ling oversaw the creation of more than 170 sets for the movie, which was written and directed by Tarantino, and follows has-been TV-star Rick Dalton and his stunt double Cliff Booth.

Many of the scenes were filmed in the Californian city – including in the Hollywood and Westwood neighbourhoods, the canyons of Beverly Glenn and the city's valleys – which Tarantino tasked Ling to turn back to 1969.

Hollywood Boulevard proved to be the easiest transformation for Ling, with a number of buildings from the film's era still standing: "Hollywood Boulevard is the last kind of great bastion that hasn't become one big apartment building," she said.

Ling designed new facades to front a number of the low-level buildings that appear in the film, fashioned to reflect the style of the 1960s. 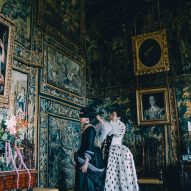 But she added that large amounts of construction work surrounding the boulevard suggested that its architectural landscape is also set to change in the near future.

"There were so many cranes off Hollywood Boulevard it looked like we were in Dubai trying to build or something," Ling said.

"It's not going to be much longer that you'll be able to even put facades on top of existing architecture," she added. "It'll just be too many high rises."

Read on for an edited transcript of our interview with Barbara Ling:

Eleanor Gibson: Could you give a brief description for someone who hasn't seen it yet of what the film is about?

Barbara Ling: It's a slice of life. Two Hollywood actors – a TV actor and his stunt double – who are kind of wandering through a bit of a middle-age crisis in Hollywood in 1969. They were more of the 1950s, early 1960s era, and they are seeing a huge change in their careers.

Barbara Ling: Quentin writes like a novel. He explains the world around the characters, and he goes off and describes things that they're wearing or doing and you get this very extraordinary novel-esque sensibility of this world.

You start out by knowing where Quentin's coming from, with these characters he's created and from there you're off with Quentin on a very huge ride of what are the areas, what are the sections, what are the pieces of this city, Los Angeles, that he wants to create in these scenes.

It became the combination of the valleys of Los Angeles to Hollywood to Westwood, to the canyons of Beverly Glenn, to the deep valleys of the city.

Eleanor Gibson: The film follows the end of the 1960s, I was wondering, what was it like to go back to that time? What was your process for going back there?

Barbara Ling: My first process was myself. Even though I was a teenager, I was an Angeleno, already zooming around with older friends through Hollywood. So to me, it was touching on the things that define the areas of Hollywood.

Quentin was young, younger, of course, more like six or seven. But he has very vivid, strong memories of going to movies as a kid in Hollywood.

Quentin knew he wanted Hollywood Boulevard put back to 1969 and the marquees of the movie theatres. Those were very important to him and these kind of iconic places that he still goes to.

The restaurants are places that existed before the 1960s, haunts that people go to and there was very little to do with those restaurants, we could actually put them back in time easier than almost anything else.

It was just working in sketches, and working with Quentin to say here's what Lancer looked like and here's what we can do if I rebuild this street, to become Lancer.

It was lots of detail work and then lots of research, and I had a great researcher. We researched into everything from old Western sets to recreations of what Hollywood Boulevard would look like.

Eleanor Gibson: Did anything stand out to you in terms of what's changed about Los Angeles through working on the project?

Barbara Ling: Sadly, Los Angeles has always been a city ever transforming itself. We've never held on to the past. With every year that goes by, we tear down more of the previous year.

Even as fast as we could build this and shoot this film, things were being torn down around us with high-rises, and glass and steel buildings going up in their place.

Eleanor Gibson: There's a lot of development going on there at the moment.

Barbara Ling: Non-stop, it just does not stop. There was so many cranes off Hollywood Boulevard, that it looked like we were in Dubai trying to build or something.

You couldn't believe how many buildings are going up at the same time. It's not going to be much longer that you'll be able to even put facades on top of existing architecture here anymore. It'll just be too many high rises.

Hollywood Boulevard does have some sections. So those are the sections we got, and that we put the old facades back on top of, but the architecture of the buildings was still the same height.

Eleanor Gibson: It was almost the last chance to shoot such a film within the old setting then?

Barbara Ling: It's getting extremely hard. It's all high-rise buildings.You can't even recreate the strip anymore.

Hollywood Boulevard is the last kind of great bastion that hasn't become one big apartment building.

Eleanor Gibson: I read that you shut down portions of the boulevard and it was obviously a huge production. Were there any challenges on set, any obstacles that you faced?

Barbara Ling: It was a huge challenge just to transform the buildings. And it was great that the city allowed it. But it took months of work to design off-site, build, bring things in with cranes, put them up without stopping tourism, then having to paint, then having to have the decorators come in and do all these new storefronts that we had put back.

That had to have been one of the hardest things to do. I don't think anyone's tried in a long time to do this kind of recreation on the street, that you couldn't stop tourism for.

It was protecting the tourists, though they were enjoying watching it. But you know, it was difficult. But when it's finished, and when you finally had that great moment of the period cars come in and all the thousands of extras in period clothing and the lights of the neon turned on. And he just went wow, you know, I'm back in 1969. So that's the kind of movie I live for.

Eleanor Gibson: And were there any other highlights during the filming?

Barbara Ling: Oh, a lot. Because we were continually changing things, we had an enormous amount of sets.

About every three or four days, the whole crew were in a new environment from 1969. It was pretty fantastic that so much could be changing in one movie.

You know the whole world of going out and recreating Spahn Ranch was also a kind of a great scene-setter for the cast and crew because you're now in a whole different environment from what the city was, and the Western sets.

Eleanor Gibson: Almost like inception, a set within a set...

Barbara Ling: That's the kind of neat thing is that you're creating a set for an old Western within the setting of the movie that you're doing.

Eleanor Gibson: Do you know how many different sets there were in total?

Eleanor Gibson: What was it like working with Quentin Tarantino?

Barbara Ling: He's unbelievable. You know, from the from the moment you read a script that reads like a novel rather than a script, to his incredible love and an infectious enthusiasm when he gets on a set.

I have never seen a director love directing as much as he does and he loves every day on set. Everything on set is 1960s, including the music. He owns a theatre in LA and he played 1960s movies every weekend night, immersing the crew in 1960s sound.

He loves filmmaking, like nobody I've ever met. I mean, he just loves it and it makes the set extremely thrilling. Because he just gets that energy of people to love it with him and it's an amazing thing to experience.

Eleanor Gibson: Did you find yourself working very closely with him? Does he get involved in that kind of creative side of the project?

Barbara Ling: He's involved in everything. He'll walk in with a little handful of props that he wants to add to the characters. He's that involved. There isn't anything he's not involved in.

He loves everything from you know, the posters and what they're going to look like, and taking posters from his house because he has an amazing poster and prop collection to the vehicles, the thrill of seeing the vehicles recreated. There's nothing that doesn't touch him. You know, he is the maestro on the set. He doesn't sit back.

Eleanor Gibson: He often makes actors in the film watch films that he believes are appropriate. What was your preparation?

Barbara Ling: Well, what he would do is show us all you know, he used his theatre in Hollywood, the Beverly was under renovation so he threw sofas in there and every Friday showed a new film to the whole crew and cast.

We watched Valley of the Dolls. There's so many films that he ran for us because they're films that mean something to him because there's elements of LA within it, or he liked how the characters were for the cast. It was very fun to have a director who owns his own movie theatre. He had a whole list of films and we watched them all.

Photography is courtesy of Sony Pictures.