Architecture studio Red Deer has completed a virtual reality entertainment space in an east London railway arch with neon interiors that draw on the work of light artist James Turrell.

The Otherworld arcade concept is the first of its kind in the UK, and combines 14 virtual-reality immersion rooms, a bar and a poke kitchen serving raw fish dishes.

Red Deer transformed the railway arch near Haggerston station in east London into a "Tron-esque industrial landscape designed to breakdown the perception of reality" for Otherworld's owners The Dream Corporation.

The arch's brick walls have been painted white and each side of the space is flanked with seven white, cylindrical pods housing an individual VR experience room.

The studio aimed to create a "neon jungle", with colourful light effects that soft-fade through a range of shades to dramatically change the mood of the space.

The dramatic lighting was influenced by light artist James Turrell, whose work explores "the altered perception of architecture through a combination of artificial and natural lighting".

"We wanted to create an immersive space suited to a wider demographic than those normally associated with the stereotypical carpeted games arcade from the 1980s," said Red Deer founding director, Lucas Che Tizard. 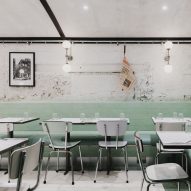 "By keeping the space minimal it made the lighting and soft hue fades the focal point of the project and gave it a feeling of a futuristic environment."

Custom-built booths integrate extra-sensory effects into the VR experience. Heat, wind, rumble and scent respond to the user's experience in the pod, in order to stimulate all the senses.

Visitors to Otherworld can chose from sixteen different experiences, such as climbing Mount Everest, fighting a zombie apocalypse, or blowing up robots with lasers.

Shiny white tables and benches line the space between the VR pods, where guests can enjoy drinks whilst they wait. The floor is also completed in high-sheen white.

A bar made from Krion at the back of the arch is illuminated by a series of neon panels and backed by a large neon circle. The bar next to a lounge area has a self-service beer tap.

The bathroom is decorated with simple white tiles on the walls, floor and ceiling. A trough wash basin features curved white tiles at the corners for a softer effect.

As in the rest of the space, bright neon lighting can be programmed to shift between a palette of colours, changing the nature of the environment.

Servers are kitted out in padded white clothing created by emerging fashion design graduate Brea Holloway, that are based on the clothing worn by samurai warriors in Japan, with a futuristic feel.

VE experiences are becoming increasingly popular. Earlier this year, British artist Antony Gormley teamed up with astrophysicist Priya Natarajan to create a VR experience that allowed visitors to "walk" on a digital version of the moon.