Hotels across the Americas are drawing on local history to create memorable guest experiences, say AHEAD Americas awards judges in this video Dezeen produced for the awards programme.

Many of the winners of this year's AHEAD Americas awards, which had its ceremony last week at the Faena Forum in Miami, are urban hotels with interiors that make reference to local history.

Johnathan Garrison, director of design firm Yabu Pushelberg and AHEAD Americas judge, noted that a number of the urban hotels amongst the winners combined historical details with modern design principles.

"They're pulling these ideas from the past and reinventing them for now," he says in the video interview, which Dezeen shot on the judging day of the AHEAD Americas awards.

The Siren Hotel in Detroit, which was named of Hotel of the Year, was commended by judges for evoking the glamour of the Motor City in the early 20th century instead of referencing the popular aesthetics of industry and decay associated with the city's recent past.

"It really creates this fantasy of what Detroit could be," he said. "It's moving away from the industrial nature of how everybody thinks of Detroit, giving it a romantic point of view."

"The Siren definitely had a tremendous amount of respect paid to the history of the property, the history of Detroit," he said. "They took what was historical, and gave it a modern twist."

Amongst the other projects highlighted by the judges was Gold-Diggers, a tiny hotel in Los Angeles that won an award for its event spaces and guest rooms.

Drawing upon its locale's reputation for musicianship and debauchery, the hotel features a fully-fledged recording studio for musicians as well as a sultry bar.

"Gold-Diggers really exemplifies the idea of partying hard and really just enjoying yourself," said Seidman. "That reveals itself nicely through the guest room design and just the general overall layout of the property."

According to Audra Tuskes, vice president of design at NeueHouse, the hotel exemplifies a niche concept executed with conviction.

The Eaton DC, which won the award for best spa and wellness spaces, combines modernist design details with pieces by local artists that nod to USA's turbulent contemporary political and social climate. 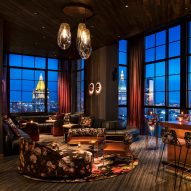 The AHEAD judges applauded the Eaton for its inclusive atmosphere.

Tuskes drew attention to the millennial-focussed amenities at the Eaton DC, which include a recording studio for radio and podcasts and a prominent wellness component.

"In hospitality, we're evolving to a place where we need to incorporate different programs based on how people live and travel currently," she stated.

Amongst the latter group is Solaz Los Cabos, a resort hotel in Mexico which took home awards in the Hotel Newbuild and Landscaping & Outdoor Spaces categories.

The architectural form of the Marriott-owned resort received acclaim from the judges for drawing attention to the surrounding landscape.

"It has these sweeping broad, bold architectural moves that really define the spaces," said Tuskes. "The reason the architecture works so well is because it enhances the experience of the place."

According to Seidman, the strongest projects from this year's winners left space for guests to interpret the design of the properties for themselves.

"The beauty of hospitality is that you're not supposed to truly dictate to folks exactly how the design should feel," he said. "You should be able to give them guidelines and hold their hand up to a certain point."

This movie was produced by Dezeen for AHEAD. It was filmed at NeueHouse New York. Images are courtesy of AHEAD.