The size of a standard fibre-cement panel defined the proportions of this simple house in New South Wales, designed by Studio Jackson Scott.

The building has a simple, rectilinear floor plan, with both the length and width designed to suit the dimensions of the cladding material. But it also boasts striking features including a geometric patterned facade and a large sheltered veranda.

"In a country where building costs are among the highest in the world, efficiency of construction can substantially reduce the cost of a build," Jackson told Dezeen.

"We had to think carefully about how to construct this building to ensure that design intent remained strong while construction details and methods remained simple. This ensured that our ideas could be easily communicated and built on site in a timely manner."

The client for the house is a market trader specialising in Mexican food. He inherited a 500-square-metre plot of land in the Byron Shire, where he grew up, after his father passed away and decided it would be a great place to build a home where he might one day raise a family.

The brief, according to Jackson, was for a "simple, comfortable home with pleasing lines and modest materials".

Jackson chose to clad the house in fibre cement, as this material offered sustainable and economical benefits, but was also easy to install and gives the building a lightweight appearance.

Timber battens were added to the facade to protect the joints between the fibre-cement sheets. Painted black to match the cladding, they create the decorative geometric pattern, which also defines the size and location of windows.

The dark cladding in contrasted by generous use of timber. Hardwood lines the walls, deck and ceiling of the veranda, while plywood covers the walls and ceilings inside the house. 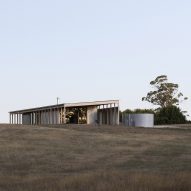 "The predominant hardwood timber used for this home is Australian Blackbutt, grown on the north coast of New South Wales. The Hoop Pine plywood was grown and manufactured in nearby Queensland," he continued.

"These locally sourced materials helped to reduce the carbon miles whilst also grounding the home and giving it a sense of place."

The house is situated at the rear of the site, to give it a north-facing aspect over the lawn and gardens.

Inside, the layout creates a clear divide between communal and more private areas.

A large amount of the home's 97 square metres is taken up by an open-plan living and dining space, situated directly behind the veranda. This room is fronted by a mix of glazed and solid doors, so occupants can vary the degree of openness and transparency they want.

At the other end of the house, three evenly sized double bedrooms sit alongside a single bathroom and a separate utility room.

Wooden furniture matches the interior finishes, particularly in the kitchen. This area also features black tiles that match the exterior cladding, while the bathroom is painted in a similar dark shade.

Photography is by Ryan Jellyman.