A screwdriver, drawer knobs and a pipe are among the objects that Berkeley studio Envelope A+D has used as beer taps in this industrial-style restaurant in San Francisco.

Radhaus is a beer hall and Bavarian restaurant located in the Bay Area's historic Fort Mason Centre for Arts and Culture, which formerly housed a military base.

The project, which is longlisted for this year's Dezeen Awards, involved the renovation of an Army marine machinery shop, and demonstrates the revitalisation that is occurring in the neighbourhood.

Envelope A+D's design preserves a number of existing details in the space, including the exposed steel roof trusses, which are painted a bright white to match the walls.

Existing polished concrete on the floor was preserved where possible and then teamed with a new aggregate, creating a patchy effect.

The entry is emphasised by a pair of large steel and glass pivot doors with red-coloured frames. Restored tall, steel sash-windows offer extensive views of the bay to create an interrupted connection between the hall, street and waterfront.

Also playing on the theme of reuse are a number of objects that the team repurposed to complete the eatery's decor. These include the bar and seating banquettes, which were salvaged from wind-fallen Ponderosa Pines in the Western Sierras.

The benches were crafted by Evan Shiveley, a tree specialist who works for wood supplier Arborica.

"The massive logs, take on a visceral presence; their scale and rawness set against a backdrop of polished concrete, the tile-clad 'beer organ' and panoramic views prompt a sense of awe," Envelope A+D said.

The centre of the beer hall is marked by this so-called "beer organ" – a structure covered in white tiles that is used to provide refrigeration for the beer kegs.

A series of taps, which are designed to change with the menu offerings, line the structure. The handles are made with found objects, that include a screwdriver, drawer knobs and a pipe.

This playful element follows droog style, an aesthetic that makes use of found objects.

"Conceptually, it is the ice-cold hearth of the space while, functionally, it is the back bar with an array of taps, storage and display of all bar glassware," the studio added. 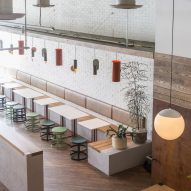 Building and historic preservation codes required the team to conserve the facade and roof, so the kitchen's mechanical equipment, including the range hood and refrigerator are situated inside a large white "shed" designed by Envelope A+D for the space.

"It is intended to evoke the kind of ad hoc structures that get constructed for office and storage uses in big open bay structures such as this," lead architect Douglas Burnham told Dezeen.

Its plain detailing and "matter-of-fact painted wood" give it an antique appearance.

Rising three storeys, the gabled volume houses a kitchen on the ground level featuring a floor covered in a matte-black textured ceramic tile.

Space for storage and offices is located on the second floor, with room for the mechanical and air-conditioning equipment on the third level.

Other projects in San Francisco's Bay Area include a restaurant influenced by the vibrancy of the Caribbean created by Emily and Hannah Collins, sisters who jointly run Roy, a studio specialising in service hospitality design.