Neutelings Riedijk Architects and Iris van Herpen have wrapped the Naturalis Biodiversity Center in over 1000 metres of delicate concrete friezes that merge fossil forms with the fabric of the designer's collections.

Neutelings Riedijk Architects and Van Herpen collaborated to design the extension to the natural history museum in Leiden, the Netherlands, which is the couture fashion designer's first full-scale architectural project.

The extension to the existing Fons Verheijen-designed museum, which was completed in 1998, includes five floors of gallery space to display items from the Naturalis Biodiversity Center's collection of forty-two million objects.

As part of the project, Neutelings Riedijk Architects has also refurbished the existing building, which now also contains office space and storage facilities.

The new building consists of two distinct elements – a stack of four offset rectangular blocks and a 36-metre-high atrium.

Each of the orange stone blocks, which contain the museum's nine galleries, is wrapped in a frieze designed by Van Herpen that combines couture fashion with rock formations and fossils.

"I thought of the beautiful work of marble sculptors like Gian Lorenzo Bernini and the way they captured soft pleated silk in stone so beautifully and so delicately," said Van Herpen.

"The intention really was not to go away from my couture process too much, but instead to still it, and to disembody it," she told Dezeen.

Each of the 263 panels that wrap the blocks were moulded from concrete and small-grained white marble aggregate to create a delicate feel that is reminiscent of fabric.

To create the form Van Herpen looked at numerous stone formations and fossils within the museum's collections, as well as travelling to see formations in situ.

"I looked intensely at many various rock formations," the designer explained.

"I went to Tenerife for example to see the volcanic rock formations and to other areas to see the stages within erosion, how water re-sculpts the beautiful rock details throughout thousands of years," she continued. 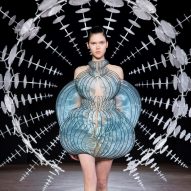 Van Herpen "especially fell in love" with the 42 million pieces in the Naturalis' fossil collection.

"This eternalised life in stone is breathtaking, these frozen forms moved me to think of stone as a drapy material, like fabric," she said. "I started to think about architecture like the archaeology of a dress."

The galleries are connected to the existing building by the atrium, which acts as the public entrance space for the museum and contains a large staircase that provides access to the exhibitions.

This light-filled space is constructed from numerous prefabricated concrete elements that create a distinctive pattern of hexagons and overlapping circles.

Although the project is Van Herpen's first large-scale architectural commission, she sees a lot of similarities between the creation of fashion and buildings.

"It felt it was a very natural move, as I have been working with architects for many years now on my own work," she explained.

"Of course there are differences between fashion and architecture, but there are so many similarities as well."

"Both fashion and architecture can give us a new space to move our thoughts around in, an unfamiliar space in which to imagine." 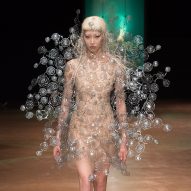 Couture fashion designer Van Herpen is better known for her delicate and sculptural clothing including a collection that focus on the qualities of water and air and one that aimed to translate the motion of a bird flight into pleated garments.

Neutelings Riedijk Architects is a Rotterdam architecture studio founded in 1992 by founded by Willem Jan Neutelings and Michiel Riedijk. Its Rozet cultural centre in Arnhem was named the Netherlands best building in 2014.