The different qualities of water and air informed Iris van Herpen's latest collection, which was presented at this week's Paris couture shows accompanied by a group of underwater musicians.

The Dutch fashion designer showcased her Aeriform collection earlier this week as part of the haute couture shows in Paris.

Each of the 18 pieces, which featured biomorphic elements and rippling fabrics, were informed by Van Herpen's fascination with the elements.

Her initial inspiration came from Danish underwater artists Between Music, who collaborate with deep sea divers, physicists and neuroscientists to develop sounds that they then perform on custom-built instruments while submerged in water.

"Their liquid voices and the subsonic darkness from Between Music overwhelmed me," said Van Herpen, who had the musicians perform on the catwalk. "Their work transcends and transforms the conventional and natural relationship between our bodies and the elements."

"It motivated me to dive into the contrasts between water and air, between outside and inside, between lightness and darkness."

The collection's largely monochrome colour palette ranged from stark whites to soft greys. Soft silhouettes were informed by the lightness of air, and prints that created the optical illusion of movement were based on the fluidity of water.

A standout piece, which was a continuation of the designer's collaboration with artist and architect Philip Beesley, featured a "feathery-light metal lace" that wound around the body.

Shoes were made from suede, and featured a welded metal heel and straps that van Herpen described as "molecular lattice".

Van Herpen, who ranked at number 124 on the inaugural Dezeen Hot List, studied fashion design at ArtEZ Institute of the Arts Arnhem. She interned at Alexander McQueen in London before starting her own label in 2007.

She has become known for working with cutting-edge materials and techniques, in particular exploring how 3D printing can be harnessed to make clothing.

Previously, she used robots to print a dress over a Game of Thrones actress during a runway show, where she also presented accessories that were distorted by powerful magnets. 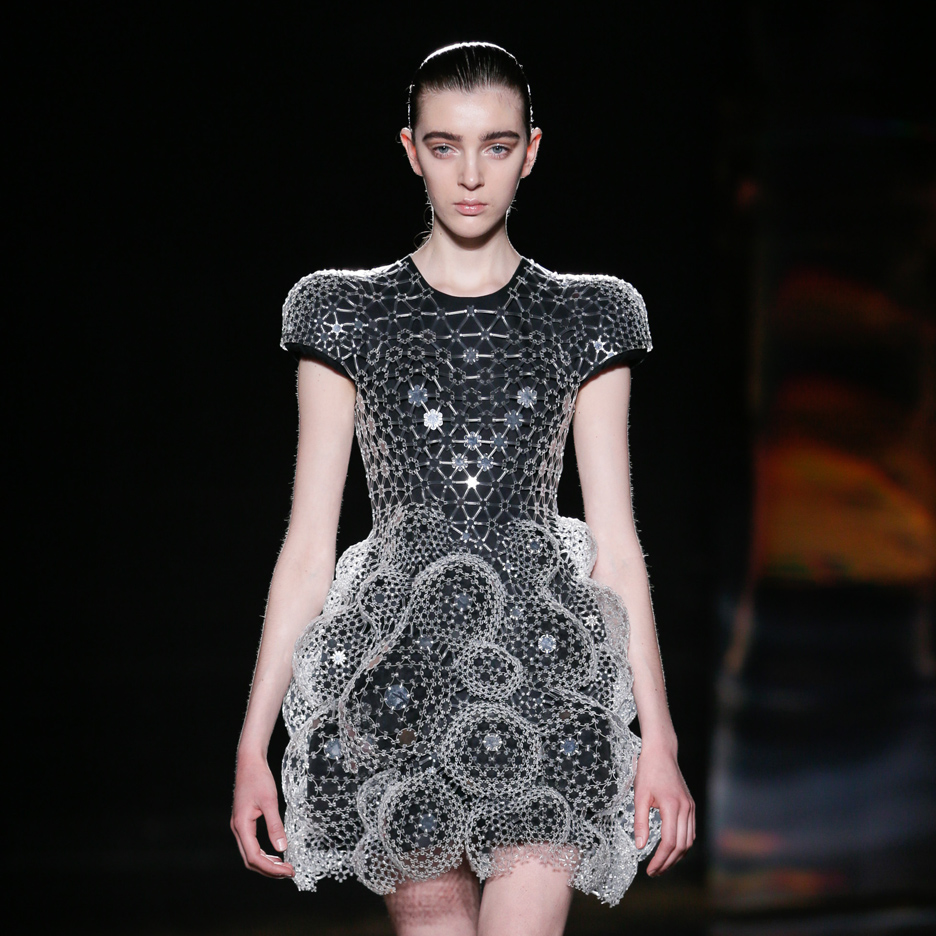 Photography is by Yannis Vlamos.