Architect André Fu has used pieces from his homeware collection to furnish a model apartment inside the Jean Nouvel tower rising above New York's Museum of Modern Art.

Fu and his Hong Kong studio AFSO created the interiors for a two-bedroom unit in Nouvel's black 53 West 53 tower, which topped out in July 2018 and is expected to complete later this year.

"My vision is to curate a poetic world of modernity and serenity that is transversal and embraces cultural nuances," Fu said.

"The holistic atmosphere of this apartment embraces my design language and is a genuine expression of relaxed luxury set against New York’s dynamic cityscape."

Among the decor are pieces from Fu's homeware line Modern Reflections, which debuted earlier this year at Milan design week.

The shade of blue seen throughout the apartment is a signature colour of the homeware line, and is called mineral blue. "I think the colour is very understated," the architect told Dezeen. "There's a sense of calmness that's tied in with it, and it's quite unisex."

"I love the fact that the unit's surrounded by quite an impressive cityscape," Fu said. He added that coupling this urban view on the 36th floor with his designs makes "everything comes alive".

A corridor upon entering has a custom-made cast bronze console by Fu, placed in front of a dark green wall with a geometric gold design. This is accompanied by minimal artwork is by Korean artist Pak Seo Bo – which is among a number of artworks that French gallerist Emmanuel Perrotin of Galerie Emmanuel Perrotin curated for the home.

The hallway accesses two bedrooms, two baths and a powder room. A master bedroom has the mineral blue and icy grey palette, while a second bedroom provides contrast with burgundy and pale salmon tones. In the second bedroom are bronze lamps, an ottoman and a Bamboo Watercolor carpet by Fu.

At the far end of the residence is an open-plan living room, dining area and kitchen. A tan geometric wallpaper covers the living space and is accompanied by a pale L-shaped sofa, grey armchairs and coffee tables. 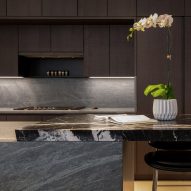 Fu designed another room divider comprising dark wood and rods. He told Dezeen the aesthetic is a fusion of Chinese and Nordic styles, as well as a reference to the geometric designs of the 20th-century Bauhaus school.

"You can call it very Scandinavian, but if you look at the interlocking detail, that's quite Asian as well," he said. "I think that's the kind of world that I live in. It's embracing cultural nuances."

Anchoring the dining area is a tubular glass chandelier, above a round wood table with matching wood chairs. A rug with a watercolour-style design in pale blue tones spans the dining and sitting areas.

Exposed structural systems known as diagrids feature in all of the residences in Nouvel's tower.

Fu worked around thee slanted columns, located in front of the large windows, by integrating white marble slabs within the structural supports. These are intended to offer either additional sitting or areas for display.

"We wanted to make the diagrid into not just a visual element and structural element, but something that's usable," he said.

Rounding out the apartment is a free-standing storage system by Fu, which acts as a closet and shelves and made of stained grey oak.

The Fu-designed home is one of 145 residences inside Nouvel's 53 West 53 skyscraper, located on 53 West 53 Street in Manhattan. It is integrated into the Museum of Modern Art with three levels at the base of the building that will be connected to the museum.

The French architect designed angled-top, black tower, while the interiors were completed by architect Thierry Despont.

Born and based in Hong Kong, Fu was named Designer of the Year by Maison & Objet Asia in 2016. His other works include Hong Kong's St Regis Hotel, the Waldorf Astoria Bangkok, London's Berkeley Hotel as well as an installation at COS in his home city.

The residence marks Fu's foray into North America. It follows a number of model homes that designers have overhauled inside some of New York's well-known skyscrapers.

Other examples are a unit by Radnor in David Chipperfield Architects' tower near Bryant Park, apartments by Jennifer Post within Zaha Hadid's curvy Chelsea building, a Molteni&C penthouse in Rafael Viñoly's 432 Park Avenue and an apartment by David Adjaye in his 130 William project in lower Manhattan.