Dedicated Verner Panton manufacturer Verpan has released three pieces of furniture designed by Panton but never before put into production, based on the designer's original sketches.

Verpan based the previously unrealised designs for the Reflect and Hive lights, and the Flex chair, on drawings found in the Panton archive. The release marks the first time that any of the three designs have been produced.

All three will be on show at designjunction, which runs from 19 to 22 September in London's Kings Cross as part of London Design Festival.

The Reflect light has a cylindrical base with a slanted top, which attaches to a stainless steel rod that holds a disc, positioned at the same slant as the base.

"The light represents a great example of his ingenuity and profound understanding of how to manipulate light to create a desired setting or mood," said Verpan.

Light is cast upwards from the tubular base and reflects off the white surface on the base of the disc to diffuse light throughout the surrounding area.

Panton's sketch of the Reflect light had no measurements or information on potential materials, so the design team created the lamp with modern techniques and materials, to realise the original design in a contemporary way.

The light has been finished in a dark grey and a bright pillar box red version. It stands at 60 centimetres tall and is made from powder-coated steel.

The beehive-like Hive pendant lamp is made up of multiple concentric shades layered to produce a sculptural effect.

The designer originally intended the light to be a floor lamp, as demonstrated by the archival sketches.

However, when they began designing the light, the design team found that when constructed according to the sketch, the weight of the design was unbalanced, so they decided to keep the shape but realise it as a pendant.

Available in a polished or yellow powder-coated aluminium finish, the shade is 48 centimetres in diameter. The fixture emits a glare-free downward glow as well as a diffused lateral light.

According to Verpan, Panton often drew inspiration from organic forms found in nature, playing with geometric forms such as the beehive.

Joining the two light fittings is the stackable Flex chair, with a "tongue-shaped" seat, and softly curved backrest on a steel frame.

Panton designed the shape of the seat to follow the contours of the sitter's body with the intention that the chair would improve blood circulation to the legs. 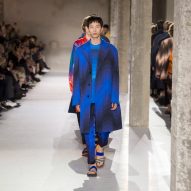 Unlike the two lighting designs, Panton included details on the particular measurement of the chair in his sketches, which the design team were able to follow.

The lightweight chair is easy to move around, and as such is ideal for use in hospitality spaces, as well as in the home. It comes with a black polypropylene plastic seat and backrest and a black powder-coated steel frame.

Verpan is run by the designer's widow and his daughter and is the only furniture and lighting manufacturer that solely produces Verner Panton products.

Earlier this year, Danish furniture brand Montana re-released the Pantanova chair that the villain Karl Stromberg sat on in the 1977 James Bond film The Spy Who Loved Me.

Originally designed for Varna, a popular Aarhus restaurant in the 1970s, the chair is made from lengths of bent steel arranged to form striking geometric shapes.