A bamboo preschool, a Palestinian museum and a nature reserve built on an old rubbish dump are among the 2019 Aga Khan Award for Architecture winners.

The six winning projects of the award were selected from a shortlist of 20 buildings from 16 countries, which was revealed in April of this year.

Alongside the Arcadia Education Project by Saif Ul Haque Sthapati, the Palestinian Museum by Heneghan Peng Architects and Wasit Wetland Centre by X-Architects, the three other winning projects are the Revitalisation Of Muharraq in Bahrain, the Public Spaces Development Programme in Tatrstan and Alioune Diop University Teaching and Research Unit by IDOM.

The Aga Khan Award for Architecture is a triennial award established in 1977 to celebrate architectural projects that "successfully address the needs and aspirations of communities in which Muslims have a significant presence". 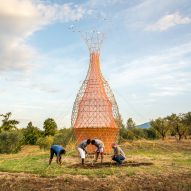 This year marks the fourteenth cycle of the programme, with winners chosen by a committee including David Chipperfield, Elizabeth Diller, David Adjaye, headed by Aga Khan – a Muslim spiritual leader.

The winners will each be awarded a share of a $1 million (£774,000) jackpot, which makes it one of the most lucrative architecture prizes in the world.

The zigzagging Palestinian Museum by Heneghan Peng Architects is one of four new builds to have won a prize this year. The three others each serve an educational purpose.

IDOM's prize-winning Alioune Diop University Teaching and Research Unit is a lecture building in Senegal, and the Arcadia Education Project by Saif Ul Haque Sthapat in Bangladesh is a bamboo preschool-cum-hostel for single women that offers vocational training facilities.

The third, The Wasit Wetland Centre by X Architects, is a nature reserve for 350 species of bird that was built from a rubbish dump in Sharjah. It exists to educate locals about the site's unique environment.

Wasit Wetland Centre is the first time a project in the United Arab Emirates has won an Aga Khan Award for Architecture.

Similarly, the Revitalisation Of Muharraq world heritage site and the Public Spaces Development Programme – the revival of over 300 public spaces in Tatarstan – are the first projects in Bahrain and Russia respectively to have ever received the prize.

The ceremony was held at the Al Jahili Fort – a World Heritage Site in Al Ain that itself received the Aga Khan Award for Architecture in 2007 following a significant renovation.