The closure of Design Exchange's permanent collection demonstrates an absence of support for the design industry in the country, says Canadian writer and V&A senior curator Brendan Cormier.

The Design Exchange (DX) in Toronto, Canada's museum dedicated to design, has ended its only display – the Permanent Collection of Canadian Industrial Design – in order to focus on biennial event EDIT: Expo for Design, Innovation & Technology.

The closure of the collection at DX, which was established in 1994, demonstrates wider problems within the design community according to Cormier.

No institution dedicated to design culture in Canada

"The DX's deaccessioning of its collection and its failure to become a museum of real importance in Canada is symptomatic of a wider more systemic problem in the country," said Cormier.

"It's a problem of overall lack of support for the design profession, and design culture in general," he continued.

"Other museums in Canada hold modest design collections, and there is the world-renowned Canadian Centre for Architecture – thanks to the individual patronage of Phyllis Lambert – but there still remains no singular institution dedicated to the collecting, interrogating and promoting of design culture in Canada".

"Canada will become one of the few advanced economies in the world without its own design museum," she told Dezeen.

DX revealed that it will dissolve the collection in March in order to focus on the design hub's events programming. This includes bolstering its 10-day festival, EDIT: Expo for Design, Innovation & Technology, which began in 2017 and is slated for a second edition in 2020, and design and technology workshops that cater to Canadian children and youth. 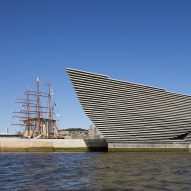 Dubbeldam is concerned about what the change of programming says about the country.

"The loss of the Design Exchange as a design museum is yet another troubling indicator of how Canada, its government and its citizens in general, undervalue the importance of design and its impact on the Canadian economy," said Dubbeldam.

"However, it is worse than that," she continued. "Never mind the cultural implications, there is a seeming lack of understanding by government at all levels that good design can be a driving force for innovation, for healthy cities, for economic growth in all sectors from technology to architecture, manufacturing to education and everything in between."

The deaccession of DX's collection – which surveys Canadian industrial design from furniture and houseware to textiles, electronics and lighting – was led by the organisation's founding curator Rachel Gotlieb.

A majority of the works have been gifted to the Royal Ontario Museum in Toronto and Canadian Museum of History in Gatineau.

"As the founding curator of DX, I am grateful to all the donors and granting agencies who have helped to build such a rich and expansive collection," said Gotlieb. "The important legacy and heritage of Canadian design will continue to be documented, preserved, and displayed at these provincial and national institutions."