Allbirds co-founder Tim Brown was disappointed with the synthetic materials used to manufacture most footwear and set out to develop an alternative that is both more comfortable and more sustainable.

The London-based New Zealander spent several years researching ways of producing shoes using merino wool, which is popular in his home country because of its luxurious softness, breathability and insulating properties.

Brown teamed up with engineer and renewables expert Joey Zwillinger to develop a wool fabric that could be used specifically for making shoes.

Following a development process that involved creating between 60 and 80 prototypes, the company settled on a design that it claimed is "intentionally minimalist" and features "no senseless details".

The company sold $1 million worth of shoes in its first month of trading, and the Wool Runners were described by TIME magazine as "The World's Most Comfortable Shoe". The shoe also features on the longlist for the Dezeen Awards 2019 in the wearable design category.

Allbirds worked with a specialist Italian mill to develop the proprietary dual-faced wool textile, which is soft to the touch, machine washable and durable enough for use in footwear.

The wool textile is used for the upper of the shoes to ensure they are comfortable and take advantage of the wool's insulating properties to regulate the wearer's body temperature.

The insole is also lined with wool so it benefits from the material's softness, moisture wicking and odour-reduction qualities. 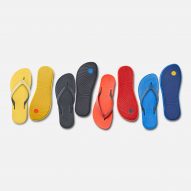 "Allbirds was the first to use wool for footwear in this way and the popularity of the Wool Runners has sparked a resurgence in popularity for the wonder-fibre," said the company.

Sustainability is central to the brand's identity and its goal is to use only renewable materials in the production of its shoes. According to Allbirds, the manufacturing process used to make the Wool Runners consumes 60 per cent less energy than conventional trainers.

The cushioned insole is made using castor bean oil, which is a more sustainable alternative to the synthetic materials typically used. The shoelaces are made from recycled plastic bottles and the products are shipped in boxes made entirely from recycled cardboard.

Based on input gathered from its customers, the company has gradually expanded its footwear collection to include a slip-on lounger, a high-top sneaker and low-rise style called Skippers.

Other products longlisted in the wearable design category of the Dezeen Awards 2019 include unisex sneakers made entirely from vegan-friendly materials and a clothing collection that uses a digitised customisation process to reduce fabric waste.