In a bid to offer consumers footwear that is both high-quality and zero-waste, Native Shoes has designed a trainer comprised of plant-derived components that are compostable and free from animal products.

According to the company, the US alone throws away at least 300 million pairs of shoes each year, and most end up in landfill. Sneakers are the worst waste culprit, made up of mostly plastic or chemically treated materials that make them impossible to break down.

Employing natural materials such as organic cotton, linen, olive oil, cork and kenaf means that the aptly named Plant Shoe is able to break down naturally over a comparatively short amount of time.

The outsole of the sneaker is made from natural latex lactae hevea – a substance produced from the tropical hevea tree, or rubber tree. It contains no fillers or petrochemical catalysts that are typically found in other rubber materials advertised as natural.

Once the sneakers have reached the end of their life, consumers can put them in their green bins, where the materials will break down at a faster rate via aerobic or commercial composting.

This is thanks to hevea latex's ability to decompose by the naturally occurring micro-organisms that are actively replicated in a compost environment.

The shoe's midsole is made from a combination of 90 per cent cork and 10 percent sisal, a Mexican agave plant cultivated for fibre production, while the insole is formed from felted corn and kenaf, a fibrous plant native to east-central Africa.

Eucalyptus is used to make the shoe's lasting board, while organic linen is used for the sock-liner. 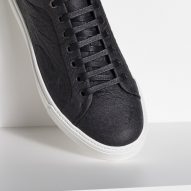 The upper comprises a Native Shoes proprietary material developed in partnership with Piñatex, the company famed for its leather-like material made from a blend of carded pineapple husk and organic cotton. It includes no polyurethane coating – an industry first for this type of material, says the brand.

Each of these materials are bound together using olive-oil-soaked jute thread and natural latex-based glue, while the sneaker itself is threaded into place with 100 per cent organic cotton laces.

"We knew that we wanted to created a timeless silhouette and that the two hardest areas to solve for would be the sole, and the mechanical bond between the upper and the lower sole," said Native Shoes. "Thinking of those two things, we designed the shoe around solutions for those two areas."

"We knew that pure hevea latex with no additives could be the only solution for a sole, and that we'd need to stitch the upper to the sole, as well as stitch the strobel and midsole together, so working on materials and construction techniques that would allow us to achieve that," it added.

The Plant Shoe was inspired by Native Shoes' mission to become 100 per cent lifecycle managed by 2023, and is the product of two years of extensive research and material testing.

"The next step beyond our current recycling initiative was to create something that wouldn't need to be reused or recycled, but instead generate zero waste," said the company. "Something that was born from the earth and could go back into it."

"This exciting design opens the door for continued innovation as we march toward our goal and reimagine product offerings for the future," it added.

Native Shoes is not the only brand to champion vegan materials in footwear. Using similar materials, fashion label Hugo Boss launched a range of vegan men's shoes earlier this year made from Piñatex's natural material consisting of pineapple leaf fibres. 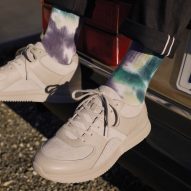